The Yamaha R25 concept made a grand debut on a race track in the hands of none other than Valentino Rossi. The global debut of the production Yamaha YZF-R25 in Indonesia was less theatrical but grand nevertheless, as the quarter litre sport bike garnered a massive 2,800 bookings in first 25 hours. 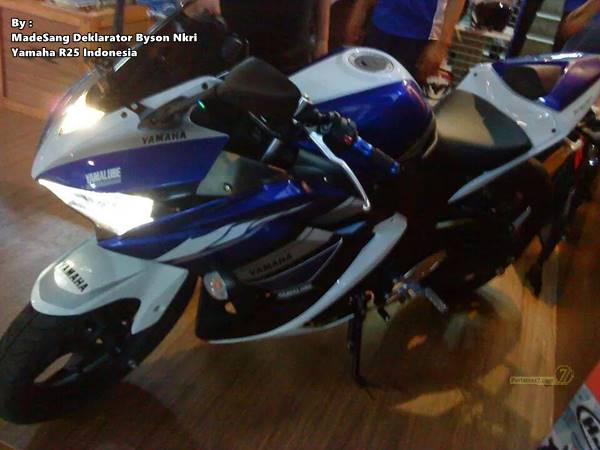 The initial response from Indonesia is so overwhelming that Yamaha had to hold back on its export plans from the country until next year and suspend bookings.

Now Indonesia's Candra Custom Knalpot, a performance tuning specialist for motorcycles, has come up with this YZF-R25 special edition donning its MotoGP livery of blue and white, just like the concept bike.

Here are some images of the special edition bike in question being prepped in Indonesia. The dual color fairing carries decals of Yamaha MotoGP team's official sponsors, making the bike look like a baby M1. The YZF-R25 special edition inherits the track inspired Akrapovic exhaust system from the concept, so a northwards revision of engine specs are expected. There is no information on when this bike will be taken to the market and the premium it would demand over the regular bike.