As an embodiment of nostalgia, Royal Enfield’s motorcycles stand out among thousands of models offered in the Indian market. Apart from the vintage-looking design, the reliability and affordability of RE products are also factors putting their name on the map. Check out this category for the latest news about Royal Enfield.

Royal Enfield, an Indian motorcycle manufacturer, has been better known for the tag of “the oldest global motorcycle brand in continuous production”. Since its starting point in 1893 under the name Enfield Cycle Company, Royal Enfield has been a subsidiary of Eicher Motors Limited, an Indian group specializing in automotive manufacturing. Headquartered in Chennai, Royal Enfield now possesses two plants located in Oragadam and Tiruvottiyur, both of which are used for manufacturing motorcycles and spare parts. Approximately, 350 Royal Enfield showrooms spread out across 239 cities in India by July 2020.

Throughout its history, Royal Enfield built up a reputation for launching its iconic Bullet model which was subsequently hand-picked by the Indian government for military purposes. The brand has continuously improved its technology with the introduction of AVL lean-burn engine in 1999 and the Unit Construction Engine (UCE) in 2007.

- Logo meaning: The Royal Enfield logo features the R overlapping wings emblem at the center. The wings do not symbolize speed as most car or motorcycle logos but represent a double “E” without a well-defined message. Lacking a unique meaning has made the Royal Enfield logo be distinguished from other “winged” emblems and aroused ones’ curiosity.

Royal Enfield’s Bullet 350 ABS used to be on the hype as soon as it was launched. This model was designed with an old-school style in which there was a reminiscence of classic British motorcycles. Besides, other details such as a single-piece quilted leather seat, a round, bulbous fuel tank featuring black-gold pinstripes are all in tune with the retro spirit, giving the bike a harmonious look. The Bullet 350 ABS gets a 346cc, four-stroke engine that can generate 19.8 bhp at 5250 rpm and 28 Nm at 4000 rpm of the maximum torque. As for fuel efficiency, this motorcycle will not disappoint you with the mileage of 30 kmpl on highways and 25 kmpl in the city. The suspension setup is quite basic with a telescopic fork and twin rear shocks, performing a braking operation at 280mm disc upfront and 153mm drum at the rear.

Since it was launched in 2009, the Royal Enfield Classic 390 has enjoyed an enormous sales volume. It is considered the best-selling motorcycle of this brand. The design of this cruiser turned around Royal Enfield’s retro-inspired styling with few cosmetic changes compared to its predecessors. 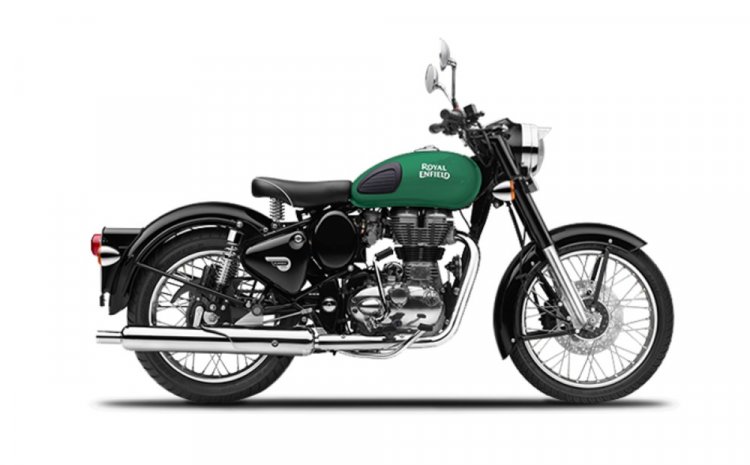 The Classic 350 has undergone an update to emission standards. The latest BS6 version is powered by a 346cc fuel-injected motor that produces 19.3PS at 5250rpm and 28Nm 4000rpm, while the BS4 one could make 20PS at 5250rpm and 28Nm at 4000rpm. The suspension system employs a 35mm telescopic fork up front and two gas-charged shock absorbers at the rear. Braking figures vary depending on two types of ABS (Anti-lock Braking System) applied - a 153mm rear drum with single-channel ABS and a 240mm rear disc with dual-channel ABS. Brakes with either system are operated by the same 280mm front disc.

When it comes to sportbikes, the Himalayan might be the utmost notable vehicle of Royal Enfield thanks to its combination of excellent power and functional design. Those who are keen on the adventure touring genre have been impressed with the simple and ergonomic design of the Himalayan. Also, the paint schemes of the new variants give the bike a more delectable look and heighten the appeal of the adventure tourer.

The Royal Enfield Himalayan gets a refined BS6-compliant 411cc single-cylinder engine mated to a 5-speed gearbox. The engine can churn out 24.31PS and 32Nm, which ensures a peppy performance across all kinds of terrains. The braking hardware comprises a twin-piston caliper at the front and a single-piston caliper at the rear, and braking duties are done by a 300mm disc and a 240mm disc respectively.

Coming up with distinctive and innovative products, Royal Enfield has proved itself as not only a product seller but also an idea seller. The brand holds an important position in the Indian motorcycle market, thereby being in the condition to rival the world-leading brands such as Honda, Yamaha, Suzuki, and Hero MotorCorp. Stay tuned to get the latest news about Royal Enfield and bike reviews by Indianaustoblog.