Volkswagen is one of the world-leading automotive brands formed with the initial mission of creating affordable cars. Currently, this brand has endeavoured to manufacture vehicles of environmental friendliness, high quality, safety in line with the Volkswagen Group philosophy. Check out this category to discover news about Volkswagen by Indianautosblog.

Volkswagen is one of the twelve brands of the Volkswagen Group which was founded in 1937 in Berlin, Germany. Headquartered in Wolfsburg, the VW Group has set up facilities in 14 countries to manufacture vehicles for customers all over the world.

In 2007, Volkswagen India Pvt Ltd was established and headquartered in Pune, Maharashtra with a view to serving domestic needs and then exporting its cars to other countries. Volkswagen possesses a plant located in the industrial hub of Chakan, Pune. This is one of the most modern and well-equipped facilities of the Volkswagen Group with its total area of over 572 acres. The production capacity of the plant reaches 200,000 vehicles a year. As of August 2020, 126 dealerships and showrooms spread out across 99 cities in India.

Volkswagen products have gained great credibility partly due to its technologies and innovations, the best-known one of which is TSI Technology with the outcome of the peppy power combined with low fuel consumption.

- Logo meaning: The Volkswagen logo features an encompassed inscription of the initials of the brand name – VW. The colour blends implied a variety of meanings. While the blue colour depicts reliability and excellence, the white colour symbolizes purity, charm and nobility.

- Yearly sale unit: Volkswagen reported its global sales volume of 28 million units in 2019. Specifically, Volkswagen India witnessed a 2.2% increase in sales from 2,466 units to 2,521 units in the month of July 2019.

Volkswagen is now offering 4 car models including 1 sedan car, 1 hatchback car, 2 SUV cars. The brand is planning to debut 5 models of different segments by 2020-2021. Let’s refer to the tables compiling ongoing and upcoming models of Volkswagen.

Since it was launched in 2010 as the first Volkswagen product on sale in India, the Polo has always been manual gearbox produces 75PS/95Nm, the turbo-petrol motor comes mated to either a 6-speed manual transmission or 6-speed automatic transmission and makes 110PS/175Nm. 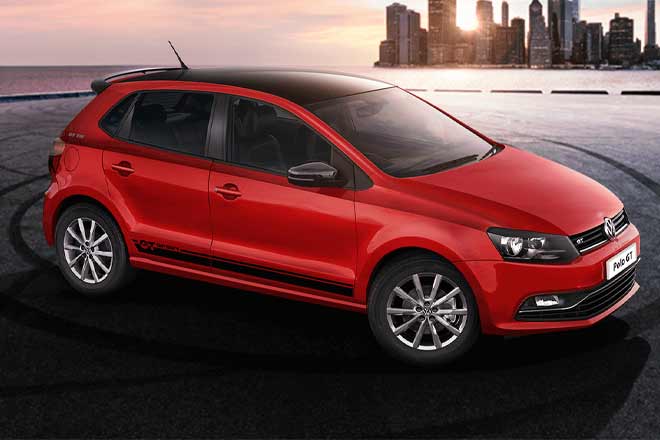 You are entitled to your choices in the aggregate of 7 colour options - Toffee Brown, Carbon Steel, Candy White, Sunset Red, Reflex Silver, Flash Red, Lapiz Blue and 6 variants on offer. Let’s refer to the prices and specifications of all variants:

The Volkswagen Veto has been facelifted at the time of its entry into the Indian automobiles market. Its newly updated design gets a black mesh grille, revised headlamps of all-LED units, a bumper featuring salient silhouettes, black fog lamp housings and projector lights added to the lower trims. The inferior remains unchanged in terms of the dashboard layout and a 6.5-inch touchscreen infotainment system. The only updated feature is Volkswagen Connectivity which is able to connect with smartphones. Also, Volkswagen equips ABS with EBD, four airbags and rear parking sensors for the sake of users’ safety. The Vento is a high-performance sedan that uses a new turbocharged 1.0-litre TSI unit. This engine comes mated with either a 6-speed manual or a 6-speed automatic transmission and makes 110PS/175Nm.

Launching the T-Roc in 2020 is Volkswagen’s crucial step towards introducing its premium SUVs to the Indian auto market. From the outside, the T-Roc display understated elegance thanks to its less fussy design with the smart set-up of all-LED headlamps, the cascading bumper, and the lower down fog. Also, such details as the twin-slat grille, sharp shoulder line and dual-tone alloys and stylishly designed LED lamps installed at the rear all kick it up a notch. The cabin provides comfy and well-positioned front and rear seats equipped with electric adjustments, and its front space is utilized with many storage places. The inferior also is loaded with modern equipment including keyless entry, auto AC, an 8-inch touchscreen infotainment system and a variety of safety features such as dual front airbags, six airbags, ABS with EBD and rear parking sensors. The VW T-Roc goes with a 1.5-litre, 4-cylinder TSI petrol engine paired with a 7-speed dual-clutch gearbox. This engine enables the vehicle to perform 150PS of power and 250Nm of torque. Besides, the vehicle employs Active Cylinder Technology (ACT) that turns into two-cylinders when possible to maximize fuel efficiency.

As its slogan “cars for people” translated from its name “Volkswagen”,  the brand has accomplished its mission as catering to customers of all segments by virtue of its flexibility and mobility. On the grounds of the success the brand has achieved since its first steps toward the Indian market, it would be undeniable that Volkswagen is able to compete with other India-leading brands such as Honda, Hyundai, Maruti Suzuki, Toyota. Keep up with Indianautosblog so as not to miss out on any news and updated information about Volkswagen.