Honda has recorded remarkable success in the Indian auto market since it offers practical and premium passenger cars studded with intuitive technologies. Honda manufactures models in almost every segment, ranging from SUVs to trucks. Check out this category to update the latest Honda car news with Indianautosblog.

Honda Cars India Ltd., (HCIL) is one of the largest automobile manufacturers in India. Honda entered the Indian market in 1995 with a commitment to offering the company’s latest passenger car models and technologies to the Indian customers. The company is a subsidiary of Honda Motor Co. Ltd., Japan.

HCIL’s headquarter is located in Kesar Solitaire, Plot No 5, Sector 19, Sanpada, Navi Mumbai - 400705. HCIL has set up its two manufacturing plants at Greater Noida in 1997 and at Tapukara later on. There are approximately 231 Honda car dealers operating in India in June 2020. Honda car showrooms in India are spread across 28 states and 151 cities and include well established as well as new Honda car dealers.

The Honda logo is a  recognizable large “H”, the first letter in the name of the Honda Motor Company founder, Soichiro Honda. It represents the coziness, the quality and safety of every vehicle produced by the company.

The logo is likened to the arms that are raised toward the sky. It also demonstrates Honda's official slogan “The Power of Dreams”.

The Honda City was first introduced in 1998 in India in two engine options – 1.3L and 1.5L petrol. Two years later, the VTEC engine was adopted in this model. The second generation of Honda City that used the 1.5-litre i-DSI engine and CVT variant was launched in India in 2003.

- In 2019, approximately 68 thousand units of Honda Amaze were sold across India.

Currently, Honda is offering 6 models on sale in India. There are five cars which will be launched soon in India in the year to come, including the City 2020, Vezel, Brio 2020, HR-V, Jazz 2020. Let's refer to the table of Honda's ongoing models. 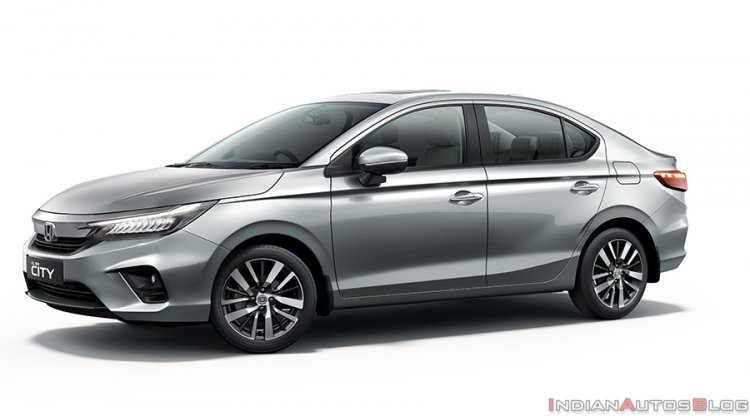 The City’s interior is well-built and studded with loads of premium features. It comes with Bluetooth Connectivity, a 7.0-inch touchscreen infotainment system which is capable of connecting with SD Card Reader, HDMI Input, Mirror Link, a radio system with 8 speakers, USB and auxiliary input, and more. Moreover, this sedan has a roomy space which can accommodate up to 5 adults thanks to its long wheelbase.

The City is currently available with a 1.5-litre petrol engine (119PS/145Nm) which can be paired up with a 5-speed MT or a CVT.

On the exterior, the car has an attractive appearance with its headlights and chrome treatment on the grill. The Amaze is a 5 seater Sedan and has a width of 1695mm, length of 3995mm, and a wheelbase of 2470. The interior offers great comfort thanks to its cruise control, auto AC, a 7.0-inch touchscreen infotainment system and push-button engine start. The Amaze has a super-generous cabin and boot with the convenience of 1-litre bottle holders in all doors. Honda Amaze features 1.2-litre petrol and 1.5-litre diesel engines. The petrol engine makes 90PS and 110Nm while the diesel one produces 100PS and 200Nm and the diesel-CVT has an output of 80PS and 160Nm. Depending upon the variant and fuel type, the car has a mileage of 18.3 to 24.7 kmpl.

Although the WR-V is based on the Jazz hatchback, it is quite rugged looking. The car’s appearance is flat and is adorned by a fat chrome grille that makes the front look beefier. The headlights get crescent moon-shaped LED DRLs  at the corners. The WR-V is a 5 seater SUV and has a  wheelbase of 2555 mm, length of 3999 mm and a width of 1734 mm. It also has cruise control, height-adjustable seatbelts and a push-button starter. Moreover, there are two interior colour options – Black and Bluish Gray and Black and Silver – although the colour differences apply only to the seat and door pad upholstery. The cabin space is super-spacious and taking the whole family for a trip will be no problem. You also can get plenty of bottle holders, two rear seatback pockets and a 363-litre boot.

The Honda WR-V offers both of diesel and petrol engine. Specifically, the 1.2 litre petrol can churn out 90PS and 110Nm, and is paired with 5-speed MT. Meanwhile, the 1.5 litre diesel can generate 100PS and 200Nm and is mated to a 6-speed MT.

Honda has long been perceived as a leading automobile manufacturer in the Indian market as it offers premium cars in different lineups. There are now six ongoing models in India, three of which are all popular with Indian buyers thanks to its impeccable performance, affordable price, and ensured safety. In 2020, Honda India will launch five more models which are likely to be big hits in the market.