TVS Motor Company is India’s third-largest motorcycle manufacturer that operates based on the discipline “presenting high-quality vehicles at the right time and at the right price”. TVS’s products reflect the innovation, environmental friendliness, handling ease and affordability, which meet a wide range of customers’ demands. Check out this category to discover more information and news about TVS reported by Indianautosblog.

As a subsidiary of the TVS Group, TVS Motor Company is an Indian multinational motorcycle manufacturer founded 1976 with its starting point of making mopeds. Nowadays, TVS has become a large-scale Indian motorcycle company with a diversified portfolio ranging from mopeds, scooters, commuter motorcycles to racing-inspired bikes.

Headquartered in Chennai, India, the company possesses four manufacturing plants, three of which are located in India (Tamil Nadu, Karnataka and Himachal Pradesh) and the rest is located in Karawang, Indonesia. By August 2020, 2378 TVS dealerships spread out across 842 cities in India.

As India’s second-largest exporter working with more than 60 countries, the brand has currently presented in numerous markets aboard. It also has acquired its reputation for major joint ventures such as the partnership with the premium German brand BMW for co-developing one of its models and the collaboration with Suzuki for technology transfer. Recently, TVS Motor has acquired the Norton Motorcycle Company, a British brand to expand their operation and business.

- Logo meaning: The TVS logo features blue lettering of the brand name “TVS” right next to a galloping red horse. In terms of symbolic meaning, the fiery horse symbolizes continuous movement and astonishing speed in Indian culture. The colouring scheme, which is the contrast of blue font and red image, represents the dynamics and the vitality of the company.

- First model launch: In 1980, the company rolled out the TVS 50 that was manufactured at the factory at Hosur in Tamil Nadu, Southern India. It was also India’s first two-seater moped.

- Innovation: TVS Motor has made every endeavour in researching and developing motorcycles running on non-fuel energy. The company has successfully launched the TVS Apache RTR 200 used ethanol in 2019 and the electric scooter iQube in 2020.

TVS currently offers 14 models which comprise seven scooters, six street bikes, and one sportbike. The company is about to launch five models by the end of 2020. Let’s refer to the table of ongoing and upcoming models of TVS.

As one of the oldest models of TVS’s lineups, the Apache RTR 160, a commuter bike, became a big hit when it was launched. Its design features muscular and edgy silhouettes and takes a like of a racing bike. The beast-inspired headlamps at the front and the LED tail lamp give the bike a sharp and aggressive look. Also, such features as a muscular-looking fuel tank, a chiseled cowl, graphics decals and a bold tail design reflect its racing characteristics. The updated BS6 Apache RTR 160 gets a fuel-injected, air-cooled 159.7cc single-cylinder engine mated to a 5-speed gearbox. The engine produces 15.53PS at 8400rpm and 13.9Nm at 7000rpm and enables the vehicles to reach a speed of 118km/h/. The bike has a single-channel ABS brake and a preload-adjustable suspension comprising a telescopic fork and twin shock absorbers. The front brake works at a 270mm petal-type disc, and the rear one works at either a 130mm drum or 230mm petal disc depending on your choice.

The TVS Apache RTR 160 4V is one of the most sought-after naked bikes in the Indian motorcycle market. The design of the Apache 160 4V is based on a sporty and sinewy concept that notably features muscular fuel tank extensions, a chunky tyre hugger, an angular all-LED headlight. The minimalist graphics decals give the bike a premium feel and cluttered stance on the road. The updated version of the Apache 160 4V is powered by a BS6 159.7cc single-cylinder air-cooled fuel-injected engine working alongside an oil cooler, producing 16.02PS at 8250rpm and 14.12Nm at 7250rpm. The engine comes mated to a 5-speed gearbox, claiming the top speed of 114km/h. The suspension system works relying on a telescopic front fork and a rear mono-shock. Braking duties are handled by a 270mm petal disc up front and either a 200mm petal disc or a 130mm drum at the rear and supported by a single-channel ABS.

There are three colour options – Blue, Red and Black offered in two variants of the TVS Apache RTR 160 4V.

The Jupiter is a scooter that the Indian manufacturer offers for city riding needs with widespread sales and affordable pricing. Its design aims at both male and female users because of simple and minimalist design. The bike was styled with necessary lines, thereby looking sleek and cluttered. Such features as a stainless-steel muffler guard, beige panels and black alloy wheels give the bike a premium touch. 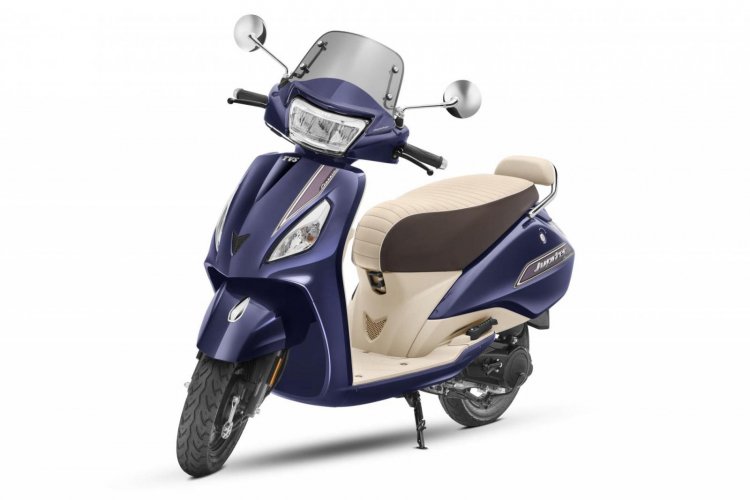 The scooter is recently upgraded with BS6 109.7cc fuel-injected single-cylinder engine which produces 7.4PS and 8.4Nm. The engine is paired with a CVT transmission which enables the vehicle to hit the maximum speed of 85km/h. The suspension system comprises a telescopic fork and a 3-step preload-adjustable monoshock and the braking duties are done by 130mm drum brake at both the ends.

The TVS company provides customers with three variants and 13 colours.

With more than 35 million vehicles plying on the worldwide roads since its first launch, TVS has occupied an impregnable position in the Indian market that such top brands as Bajaj, Hero MotoCorp, KYMCO, Honda Motorcycle have jostled for. Certainly, we are on firm ground to believe in the bright prospect of TVS’s upcoming products. Do not forget to check out Indianautosblog regularly to catch up with news and reviews about TVS’s lineups.