Volvo V40 Cross Country has been spotted for the first time at a dealer’s yard in Kochi. This is Volvo’s answer for the burgeoning entry level luxury car market in India. 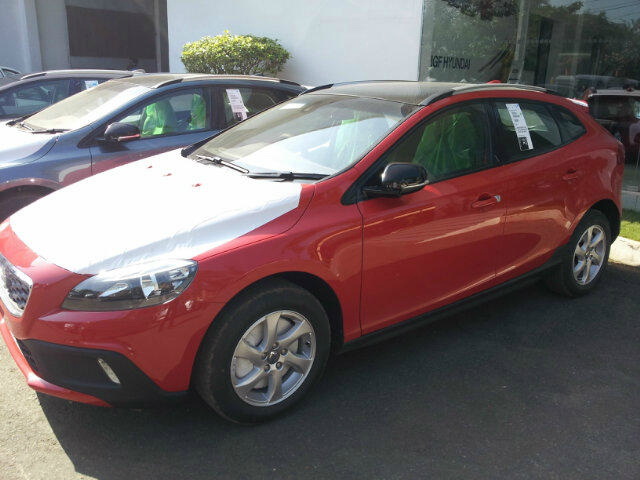 Back in February, when we met Mr. Tomas Ernberg at the launch party of the new D3 engines, he expressed his plans to get into the entry level luxury market in India. This segment was created by the BMW X1 and now has the Audi Q3 and Mercedes B-Class fighting for market share.

We believed that Volvo’s answer to this segment would be the speculated XC40 crossover. There was also a possibility that the V40 hatchback could possibly see an India debut but the chances were slim. Volvo India’s weak marketing machinery couldn’t have managed to convinced the Indian masses to shell out huge moolah for a hatchback.

Then came Paris Motor Show where we saw the V40 Cross Country – a slightly jumped up version of the V40 with some offroad garnish such as a fake skid plate, bigger alloy wheels with chunkier rubber, roof rails and chunky black cladding elements all round the body. Immediately we realized, V40 Cross Country is coming home!

We met Tomas Ernberg again in Chennai a few weeks back to understand the plans for the V40 Cross Country. He gave us the following details –

The V40 Cross Country will be launched in India by March end or April and will play a major role in the Swedish car maker's expansion plans. Volvo India plans to be a ‘Top 3’ luxury player in India by the end of this decade and wants to expand its base to 43 dealerships from the current 12 by 2020.