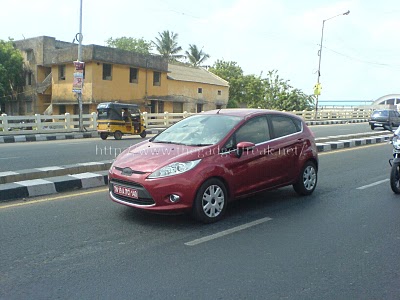 Bringing you exclusive video footage and a batch of spy shots of the European Ford Fiesta hatchback testing in Chennai was just the start. Thanks to Gadget Freak, we're able to continue that tradition by showing you a pair of Fiestas testing on the Old Mahabalipuram Road in Chennai.

Initially, it was assumed that Ford will launch this car in India over the next 12-18 months. A few others speculated that only the sedan version of the Euro Fiesta will be launched here, and preliminary testing of the hatchback is almost as good as testing the sedan.

Now we believe Ford could be testing a new powerplant, most likely a diesel engine, under the hood of this new Fiesta. We don't have any confirmations, but the new diesel engine under this Fiesta's bonnet could be a 1.6-liter common rail diesel engine fitted with VGT and intercooler.

The new 1.6 diesel would naturally not be limited to the Euro Fiesta, and will be employed on other Fords too. We don't have more to share at the moment, but we shall keep you posted as we learn more.