The Toyota Corolla Furia concept shown at the Detroit Auto Show in January this year was widely considered to be a concept car of the 11th generation Toyota Corolla. 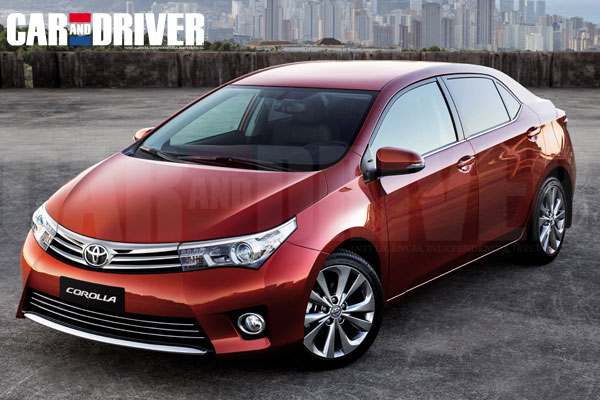 The world famous midsize sedan is perhaps the superstar of the auto industry and features at the top of the list of the world's best selling cars in history.

However this wasn't to be - no less than a month after the presentation of the concept, the production model's images leaked on the internet from a private presentation. Oh yes, the design was a drastic transformation, but we failed to find strong connections between the Furia and the production car.

Car & Driver Brazil has carried a rendering of the 2014 Toyota Corolla from a different angle in a darker body color. The author describes the Corolla as being 4.62 m long (more than 8 cm than the current version), 1.81 m wide with a wheelbase of 2.70 m.

The head room has improved considerably and so has the rear seat travel experience. It features traditional analog style instruments along with a sober background lighting and trim colors.

The engine options may not differ from the current crop for the Brazilian market. The incoming model will continue with 1.8- and 2.0-liter engines. What changes, at the request of Brazilian customers, is the gearbox. Both manual and automatic gearboxes will feature six speeds.

The new Corolla debuts in mid-to-late 2013 and about six months from the international launch schedule, the car will begin retailing in overseas markets. We can expect the new Corolla to bow in India in mid-2014.