Based on the low-cost CMF-A architecture, the Renault Triber is, in essence, an MPV-bodied Kwid. But, wait, there’s more to the bargain basement MPV than its connection with the budget-end hatchback. For starters, it looks almost nothing like the hatchback sibling, and, instead, has a clearly distinct identity. Even on the inside, you’ll be pretty hard-pressed to pinpoint the similarities between the two models. More importantly, with the dud-seller Datsun GO+ notwithstanding, it’s practically the only seven-seater sub-4-metre model worth your attention. So, is the new people-mover ready to become a disruptive force in the market? Well, we were in Goa recently to find our answers. Read on for our Renault Triber first drive review –

While the Renault Triber shares its platform with the company’s low-price hatchback, a look at the new model is enough to establish a clear visual disconnect between the two siblings. For starters, the Renault Triber offers more upmarket aesthetics, but the real point of focus here is the smartly-designed exterior packaging, which, in turn, has helped the company pack in enough seats to easily squeeze in up to seven passengers. In line with this, the highlights of the design include a cab-forward layout with a small hood and short overhangs.  The Triber has a wheelbase of 2,636 mm, which, to put things in perspective, is 46 mm longer than what the Hyundai Creta's wheelbase, and roughly 37 mm lesser than that of the Duster.

The front-end of the Renault Triber boasts a contemporary facade that is characterized by a family look courtesy a wide upper grille and a sleek pair of headlamps that carry a projector unit each. The SUV-inspired bumper carries horizontally-positioned LED DRLs nestled in chrome-infused housings. Oh, and there’s even a faux skid plate to round off the rather rugged look. The styling package continues to hold your interest even in the side profile. While the typically MPV-ish silhouette doesn’t break any new grounds in terms of its visual appeal, bits like Kwid-like plastic cladding on the wheel-arches, black vinyl that serves as a rub strip, a kink in the beltline near the C-pillar, roof rails and smart-looking 5-spoke wheel caps that mimic alloy rims would catch your fancy. Also worth a mention here is that the roof features a hump towards its rear, which plays a part in ensuring enough headspace for the rear occupants. The posterior has a somewhat European look, with twin-port wraparound taillamps, bold chrome-plated branding and a faux bash plate featured on the bumper. As expected, even the interior has little in common with that of the Kwid. True, the material quality stays pretty much the same but there’s really little else that reminds one of the hatchback. The dashboard, for starters, features a totally different look and has a brushed aluminium-finished trim that separates the top portion from the rest of the panel. Taking centre-stage on the mid-portion is a fairly large touchscreen infotainment unit that not only offers Android Auto and Apple CarPlay connectivity but even provides intuitive layouts with lighting-fast touch response. Furthermore, the Driving Eco2 app offers feedback on your driving style, which can be used to improve it to boost fuel efficiency. Other features that the range-topping RXZ grade offers include a cooled storage compartment near the handbrake lever, a semi-digital instrument console, aircon vents for the middle and rear-most rows, passive keyless entry with push-button start/stop, electrically adjustable ORVMs and several 12-volt charging sockets strewn across the cabin. 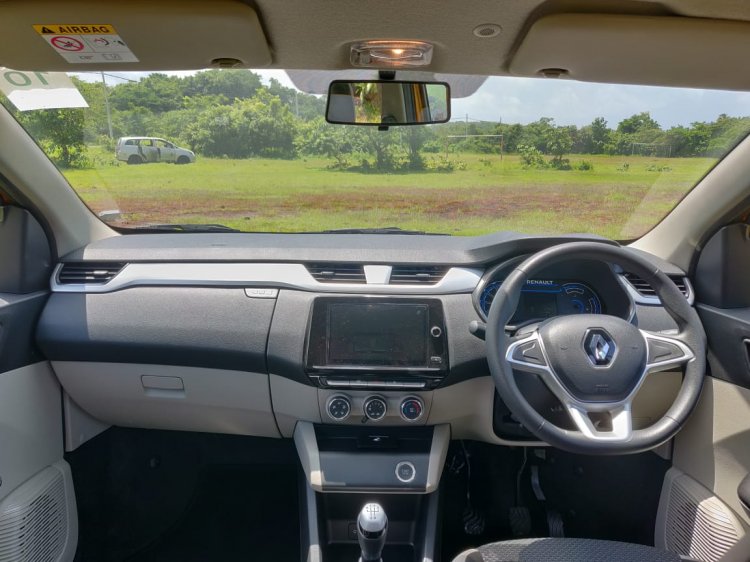 While the Renault Triber is fairly feature-laden, especially in the RXZ grade, it’s actually the practicality of the cabin that’s its biggest USP. To start off, there are at least a dozen storage spaces located across the cabin. The front-section, alone, offers three covered storage areas – a conventional glove-compartment, another glovebox located in the upper half of the dashboard, and the aforementioned compartment near the handbrake lever. The latter even offers a cooling feature to keep small bottles and cans refrigerated. Also, there are several bottle holders located at various strategic locations across the cabin.

As you might have already figured out by now, the Renault Triber comes with a seven-seat layout. The company has, so far, listed four seating arrangements – the 7-seater ‘Triber’ mode, the 5-seater ‘Life’ mode, 4-seater ‘Surf’ mode, and a 2-seater ‘Camp’ mode. The party trick here is that the Triber is the only-of-its-kind vehicle to offer ‘detachable’ last row of seats. The legroom is quite phenomenal in the front and middle row seats, while the last row is best used only for short urban excursions.

Also, the MPV benefits from a flat transmission tunnel, thereby easily allowing accommodation of three adults in the middle-row. The easy ingress and egress are the cherry on the cake. With all rows of seats in place, the boot space on offer is a paltry 84-litre, but the luggage carrying-capacity can be bumped up to 320 litres with a 6-seater layout. Furthermore, using a 5-seater layout maximizes the storage capacity to a whopping 625 litres.

Powering the Renault Triber is a VVT-equipped version of the 1.0-litre three-pot gas-burner that propels the Kwid 1.0. For the new model, the motor outputs 72 PS of maximum power and 96 Nm of peak torque. Currently, a 5-cog manual unit is the only transmission on offer but the company plans to introduce an AMT in the near future. Get behind the wheel and the similarities with the Kwid are easily apparent, which is quite a pity if you consider that the exterior and interior successfully conceal all connections between the two siblings. 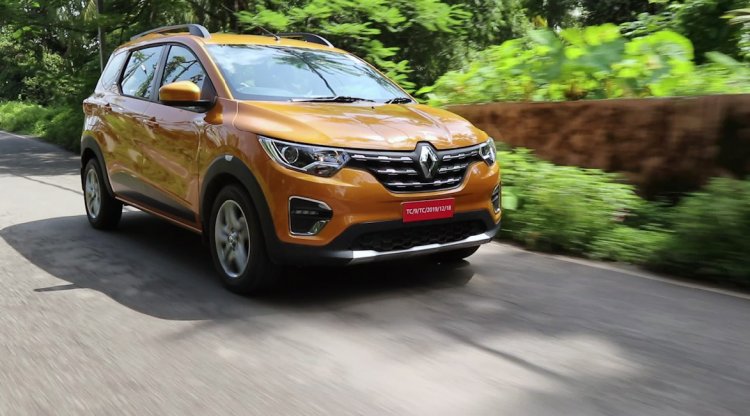 Three-cylinder petrol engines have come a long way in terms refinement, but the Triber’s motor greets you with the stereotypical three-cylinder whine from the moment you hit the gas. The NVH levels, for the most part, are quite high as the Triber lacks sufficient insulation. On the go, you’ll be quick to notice the rather sluggish build-up of power and it’s only after 3,000 RPM mark that the motor comes into its element. The performance can be best described as satisfactory as the marginally higher performance figures from the Kwid-sourced three-potter fail to make up for the 220 kg increment in weight. The gearbox, like that of the Kwid, is quite notchy, while the clutch action isn’t too light either. As expected, the ride and handling characteristics of the Renault Triber imitate those of the Kwid. The steering wheel remains lightweight, regardless of speed. Although a boon in the urban mess, the light weight, coupled with the negligible feedback, holds you back from going fast in the corners. The ride quality, however, is clearly Triber’s forte. The suspension stays a bit stiff at low speeds but there’s a noticeable improvement as the speeds rise. The Triber can pretty much glide over most of the undulations in a manner that is usually associated with some bigger and more sophisticated models. The brakes aren’t extraordinarily sharp but are adept at hauling down this MPV from high speeds without much fuss. To start with, the Renault Triber offers a one-of-a-kind interior setup. It is feature-laden and offers as many as seven seats along with several permutations and combinations for the seating layout and about a gazillion storage spaces. Plus, its exterior holds its own with a thoroughly modern and purposeful design that has little in common with the donor hatchback. Unfortunately, the retuned 1.0-litre three-cylinder engine from the Kwid can do with some more zest, while a better-weighted steering could have further enhanced the package. That said, the attractive price tag of INR 4.95-6.49 lakh (ex-showroom), a highly practical cabin, modern looks and the great ride make the Triber a sensible option for a B-segment hatchback buyer who requires a practical and a fairly spacious MPV for less than Maruti Ertiga money.