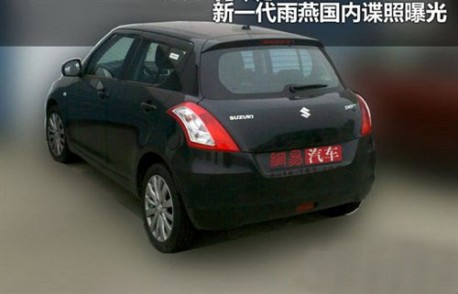 Chinese auto blogs are carrying images of the new Suzuki Swift testing in China. Based on a new platform, the updated Swift could be manufactured by the Changan-Suzuki joint venture next year.

Car News China reports that it will take a while before China gets the new Swift. We're carrying this news on IndianAutosBlog.com to inform others that we're not the only nation waiting for the improved Swift.

Even though India's among the leading markets for the Swift hatch and the only market that sells the sedan, it has been asked to wait for the new Swift since the European debut last year. There have been several reasons for its delay like -

1) Demand for the existing Swift is very strong and therefore they see no reason to change the car
2) RHD conversion takes a while, but that's a silly excuse in 2011
3) Worker strike at the MSIL plant last month followed immediately by the maintenance shut down results in longer waiting period for the existing car
4) There's no appreciable difference between the two generations
5) Swift is the best seller and the margins are better on the old model compared to the new one
6) Maruti wants to play the waiting game and spoil everyone's party by doing something insane with the price

We hear from our sources that the new Swift could be launched in October. Will it come this time?