We just brought you the spyshot of the next gen Hyundai i10 doing rounds near Chennai and now we bring you the new Hyundai Santa Fe which is busy preparing to foray into the highly competitive Indian SUV market.

[Left: The Hyundai Santa Fe is being followed by a pair of Hyundai i10 test mules; Right - The i10 is upsized, while the Santa Fe fills into attractive alloy wheels]

The test mule was spotted testing along with prototypes of the next gen i10, near Chennai. These spyshots were sent by our ardent reader Mr. S. Sriram. 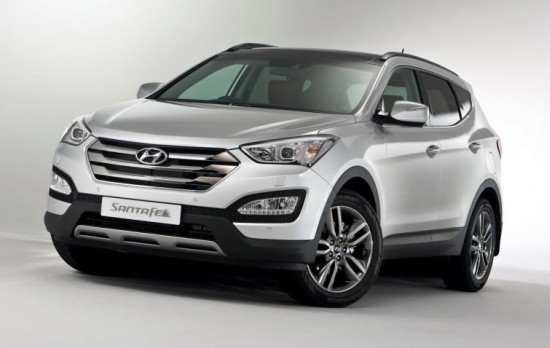 Even though the car is heavily camouflaged, the attractive curves of the Storm Edge design language never fail to get your attention. The car has an imposing road presence given its full sized dimensions.

Sadly, the India bound car is the short wheel base, five seater version which can be specified with a pair of optional jump seats at the rear. There is also a seven seat version called the Grand Santa Fe which debuted for Europe at the Geneva Motor Show but it is not earmarked for the Indian market.

The engine option for India will be the same 2.2-litre 194 bhp diesel engine, paired to 6-speed MT and AT, lifted off the current car. The engine makes the SUV the most powerful in its class. Competition would come from the Toyota Fortuner, Ssangyong Rexton, Chevrolet Captiva and the Nissan X-Trail.

The Hyundai Santa Fe's biggest strength would be its styling and hi-tech interior. In the customer clinics that Hyundai conducted for the prospective Indian customers, people walked away impressed by the SUV's feel-good factor.

The new Hyundai Santa Fe is expected to be the South Korean giant's first launch this year and could come sometime in mid-2013. If this plan doesn't work, expect the new Santa Fe to launch in time for the festival season or at the 2014 Auto Expo.