The first fully undisguised image of the Mahindra Verito Vibe has reached the internet, thanks to our friends at AutoCarIndia.com. 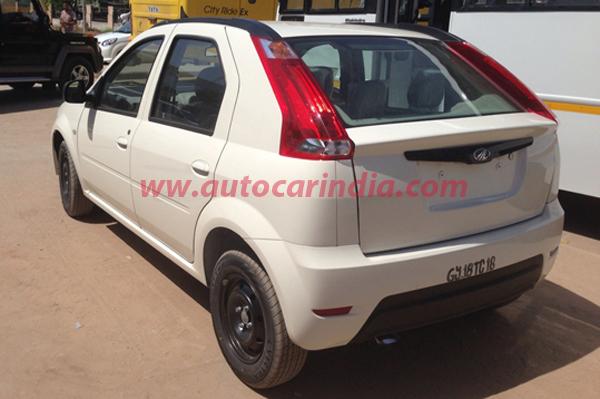 Images confirm that the car is a hatchback. When Mahindra announced the branding through email last week, they cleverly worded the press release to not mention the car's body style. Test mules spotted around Chennai were fully camouflaged and kept us guessing.

The Vibe's rear has been completely modified for the car to qualify for small car benefits. The sub-4m Verito Vibe has a long vertically-stacked taillight cluster that runs the full width of the C-Pillar. This is the design direction Ford used on the rear of the previous generation Focus.

A whiff of sportiness is introduced by the roof rails and the dual tone rear bumper. Mahindra designers have masked the loss of the boot by detailing the rear with a small plastic embellishment above the number plate enclosure and added two knife-edge type reflectors on the bumper.

The front fascia is similar to the Verito sedan, this being a lower level variant, misses out on foglights and chrome grille. The doors and other body panels are the same. We carried a spyshot of a test mule on Saturday that hinted at a more basic and mildly different interior.

The 1.5L K9K diesel engine with about 65hp is likely to stay on from the sedan. There is no plan to offer a petrol option as Mahindra doesn't have an engine that fits the legislation of a small car.

Mahindra has confirmed that the launch of the Verito Vibe will be held in May.