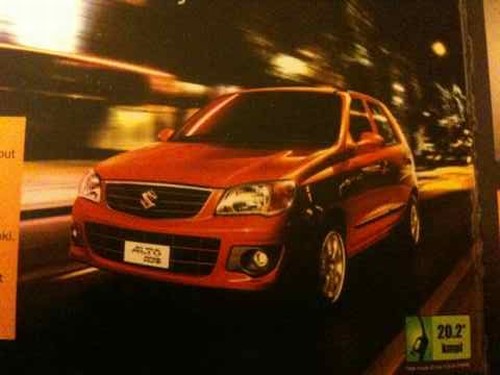 Overdrive has obtained the brochure cover of the soon-to-be launched K-Series Engined Maruti Alto. The car is expected to hit showrooms across the country next month.

The leaked brochure cover shows the redesigned front end of the car which has been embellished with a new horizontally slatted radiator grille with a horizontal chrome strip, redesigned headlamps and front fog lamps with a new housing for the lamps.

The K-Series Alto will be based on the current Alto's platform and will have a larger engine bay to accommodate the bigger, more powerful 1-litre K-Series motor. The car will also feature upgraded brakes and suspension to deal with the greater power and heavier weight of the new car. The new Alto will also have 50 mm more legroom over the current car and hence will be slightly longer in length.

The K-Series Alto will also have completely refurbished interiors with a new steering wheel and gear knob. The car could borrow a lot of interior components from its bigger stablemates such as the Zen Estilo, WagonR, Swift and the Ritz.

The new Alto when launched will fill the gap currently existing in Maruti's lineup between the 800 cc Alto Lxi and the Lx variants of the Zen Estilo and the WagonR . The new Alto will be a typically Maruti value-for-money hatchback with good fuel efficiency and low running costs and should round off Maruti's small car portfolio for the Indian market, till the all-new next-generation Swift arrives during the first quarter of 2011.