Hyundai has officially revealed a teaser image for the upcoming Hyundai ix25 ahead of its Beijing Auto Show debut, as per Chinese media reports.

The Ford EcoSport rivaling Hyundai ix25 will be manufactured, for China, by the Beijing-Hyundai joint venture. Although unofficial, reports suggest that the compact SUV will be powered by a 1.6-liter and a new 1.4-liter petrol engines, both mated to a 5-speed manual or a 4-speed automatic. 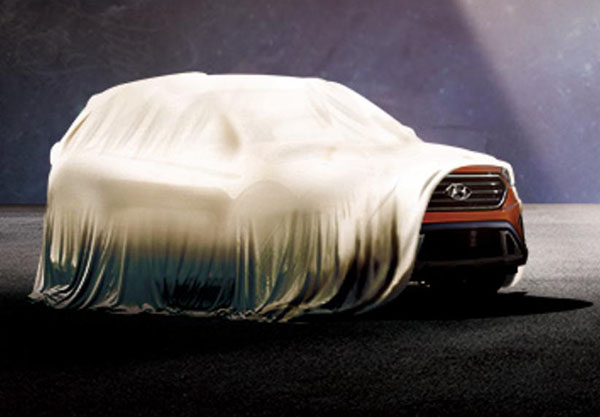 The ix25 has been caught spying in China so many times that it's almost as if the car has already been launched.

Last week, clear interior spy shots of the compact SUV revealed that the interiors were inspired by the new Hyundai Santa Fe. The center console is dominated by vertically designed AC vents featuring silver accents, while sitting in between these vents is a music system. Controls for the fully automatic air conditioning system are positioned below the music system on the same vertical stack.

The SUV is supported by the same platform that houses the next-generation Hyundai i20. Slotting under the ix35/Tucson, the car will go up against the Ford EcoSport, Honda Vezel and the Dacia/Renault Duster. However, as with Hyundai, spy shots have already revealed features like rear aircon that isn't present in its competition.