Ford India's Mike Boneham opens up to IAB about the Figo facelift, Fiesta facelift and EcoSport

Over lunch, we sat down with Ford India's President & Managing Director, Mr. Michael Boneham, who has been taking note of our recent blog updates, to discuss red hot topics of Blue Oval products. Indian Autos Blog readers were the first to bring to light cosmetic updates to the Figo as well as undisguised prototypes of the EcoSport. 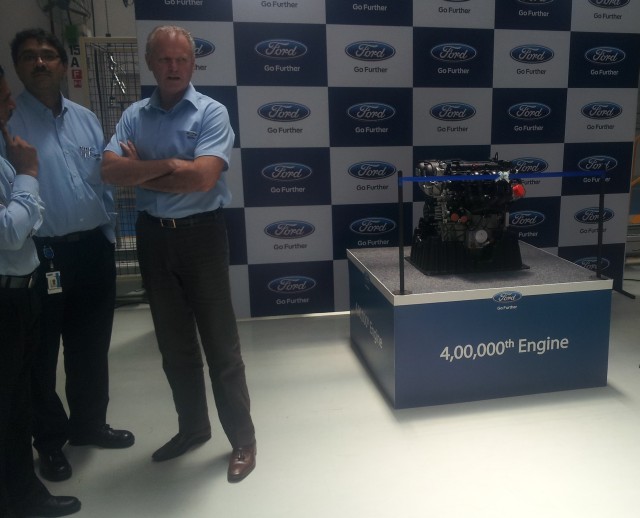 Today we can reveal that Ford India is certainly looking at the festival season as a time to launch the upgraded Figo while the EcoSport will come in early 2013.

Can you speak about the export markets for the Figo?

We have some big markets out there in South Africa, in Mexico and in the North African hub, Middle East, etc. But our bigger markets are in South Africa and Mexico. Both of them very strong in petrol. Essentially that has helped to offset the downturn in petrol demand here in India. With the devaluation of rupee, our exports have helped to provide a natural hedge against currency movement. I think overseas markets are also affected by the global lack of optimism.

However we are seeing an increased demand out of Mexico because the Figo fits in very nicely in a segment where they haven't had a vehicle before. The same in South Africa. Its an entry level vehicle in both markets and is doing tremendously well.

What do you have planned for the Figo? Will you cash in on the festive season rush by upgrading it?

I'm not going to announce what we're going to do with our products, but clearly you are making some strong points. We are sensible at looking at the market and understand what is the dynamics of the market. So just as we've done the Classic Titanium, down the track, there may well be similar things going on with the Figo.

See images of the Ford Figo facelift from Chennai

That said, I wouldn't stop people going and buying Figo now! We are very happy with the response and a lot of it has been driven out of it..our inability is to meet the diesel demand and the sudden fall in the petrol demand.

So let's see what happens in the festive season, we think the Figo stands up extremely well relative to the competition in its segment.

When does the EcoSport launch? What about its pricing?

We're very excited about that. I think the car got a tremendous response in the Auto Show. We launched the exterior in Delhi and the interior at the Beijing Auto Show. We have some more activity planned as we move through the course of the year. It will be early next year before it is launched.

See images of the Ford EcoSport testing with no camou

We're going to deliver outstanding value for money that the customer wants. We are also going to deliver a product that excites a broad range of people. We have to position the product quite aggressively. I think what I have learned after 5 years in India is the consumers here want value and they'll pay for value..they'll think about it..if you play the price card you will go to where the others haven't succeeded. So what you have to play is the value game.

What about the market under the Figo? Do you think reviving the Model T is a good idea for emerging markets?

We never ignore any segment, but we look at what's right for us relative to the product lineup we've got globally because all the products we're going to launch from now on have to be part of the global platform strategy. We've announced 8 new products coming in here by mid-decade..I'm not going to say what segments, vast majority will be in the small car segment, whether it is in A, B or sub-B, we're not going to make announcements today but what I would say is we are able to compete in all those segments if we believe we can deliver what the customer sees as true value in those segments.

Interestingly in the Figo, 65% of the buyers are first time car buyers. So they've jumped over the A Segment and the sub B segment and moved straight to the B hatch. That tells you something what people see as value for money.

Do you think you should call in the Fiesta facelift (likely to arrive at Paris 2012) considering the product hasn't had the best of starts?

As I said we have 8 new products we're going to bring in (hints that a facelift does not qualify as one of the eight) and we'll stick to our cycle plan rather than respond to knee jerk reactions, we won't do that..and so let me announce the launches as they come..I understand you need to get new news on product (for IndianAutosBlog), but I'm not going to respond to it!