On the Car and Bike show Facebook page, Parag Raheja has posted the pics of the 2012 Captiva doing its testing rounds in India. The test mule’s front facia is covered in heavy camouflage. However as the product has been launched in the international markets, we have a fair picture of what it looks like. So let’s take you through all the changes that are expected. 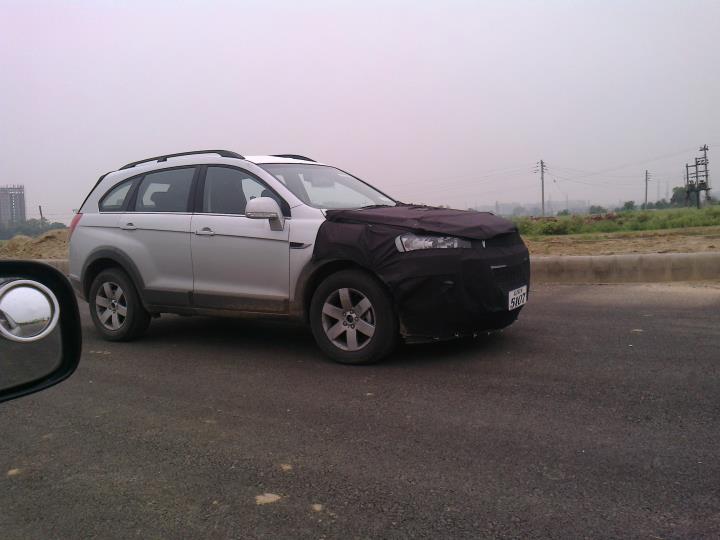 Let’s start with the new design. There is a reason why the front fascia is covered in heavy camouflage because major changes have happened at the front. The new Captiva bears a bigger grill than the older one. The tail lamps have been give a small touch up to make them look new. Other than that, the rear and the side profile of the car has not been touched much.

On the inside, there is the typical dual cockpit design that you may have seen on the Cruze and Beat. You get two tone interior – black and grey. GM says that they have taken great strides to improve the quality of materials used in the new Chevy. Other features include

The engine that is most likely to come to India is the 2.2 liter turbo diesel with 163 bhp. It can accelerate from 0 – 100 km/hr in 9.9 seconds and can reach a top speed of 189 km/hr. Globally, it is available in both automatic and manual variants. Our guess is that the Automatic variant will be making it to the Indian shore.

Sadly GM India has ruled out the new Captiva for this year. This is what one GM India official told us -

Director of Sales for GM India Vikas Jain to IndianAutosBlog.com -

We have enough demand for the Captiva and we are still not able to meet the current demand. So we will not be launching the facelifted Captiva this year. GM India will completely focus on volumes of 2011. The Captiva segment as such doesn’t align with that strategy

However, we can expect an early next entry or an Auto Expo launch