Audi A4 is Auto Bild's most beautiful car of the year 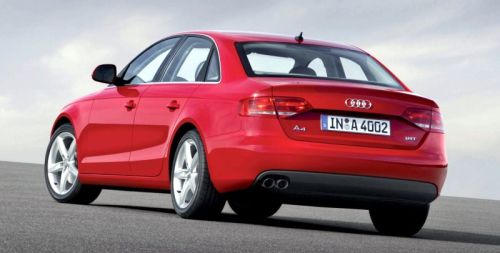 42,000 readers of Auto Bild magazine think the Audi A4 is much better looking that any other car in its class, and rightly so.

The A4 is Audi's reply to the C-Class and the 3-Series and what a reply it is. Produced since 1994, millions of customers all over the globe have experienced the strengths of this car, which are safety, comfort and power. The award winning A4 is built on Audi's Modular Longitudinal Platform which is a flexible one and permits the S5 sedan and the Q5 SUV to as well be formed on it. The car is also sold in India after its introduction as CBUs earlier this year.

Audi is making a habit of winning the Auto Bild Design Award conferred by readers of Auto Bild: After voting the Audi TT the winner in 2006 and the Audi R8 the victor one year later, the readers of the German automotive magazine this year chose the Audi A4 as the “most beautiful car of the year,” and thus as the overall champion. In addition, the A4 also took a clear first place in the sedan and station wagon category, finishing well ahead of its competitors. The Audi A3 likewise outperformed all its rivals in the small and compact car segment, as did the Audi Q5 in the off-road vehicle and SUV category.

Approximately 42,000 readers of Auto Bild took part in the voting on vehicle design, choosing from among more than 100 cars in seven categories. The magazine has been presenting the award since 2006, with Audi taking first place overall every year.

The Audi Q5 immediately won out in the off-road vehicle and SUV category this year, before even being launched on the market. In the overall rankings, the Q5 received so many votes that it took third place its first time out.

The Audi A3 product improvement impressed readers, accumulating more than 23 percent of the votes. Audi rounded off its success in the study and concept car category, taking second place with the Audi A1 project quattro.

Rupert Stadler, Chairman of the Board of Management of AUDI AG, will accept the award from Bernd Wieland, editor-in-chief of Auto Bild, at the Paris Motor Show on Thursday.