The upcoming Audi A3 sedan has once again been spied in Mumbai without any camouflage whatsoever.

A report on Carwale shows the A3 sedan running in Powai, Mumbai. The sedan is expected to be launched within the next few months, as was reported earlier. 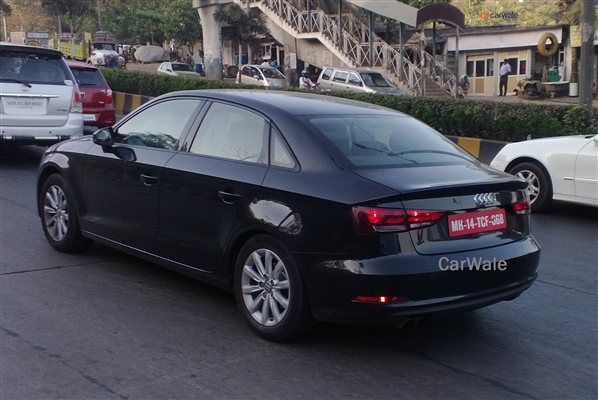 Despite making its official India debut at the Auto Expo 2014, the sedan has been caught testing regularly, with first pictures emerging as early as August 2013. The company is also considering the A3 cabriolet in India after it received a good response to it at the Auto Expo.

While Audi has confirmed a sub Rs 25 lakh price tag for the sedan, the cabriolet is likely to be a niche offering. However, it is also known that the A3 will be assembled in India via the CKD route right from the get go. The A3 is expected to come with two powertrains. The base variant is a 1.4-litre TFSI with 138bhp on tap. Next up is the 1.8-liter TFSI that produces a meatier 177bhp, paired to a 7-speed DSG gearbox. There is also one diesel option, a 2.0-liter TDI engine that churns out 150hp and 320Nm of torque paired to a manual transmission. The version shown at the Auto Expo 2014 was the 1.8-liter petrol.

Audi has had a fantastic year in 2013, becoming the first of the 3 German luxury brands in India to surpass the 10,000 unit sales mark.