The third generation 2015 Audi TT may have had its world premiere just two months ago at the Geneva Motor Show, but the sportscar has already arrived in India. This silver 2015 TT was spotted on test in Navi Mumbai by a Top Gear Malayalam reader.

Audi India’s former CEO, Michael Perschke, told Indian Autos Blog that its not uncommon for Audi’s global models to test in our country, as our roads provide a variety of challenges, both in terms of terrain and temperature. 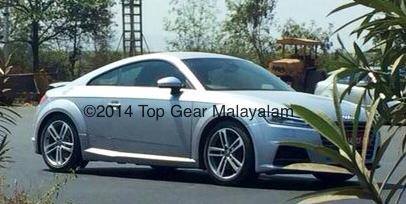 The new TT has not gone on sale in its home market in Germany yet. VW officials told the media at the car’s unveiling that sales aren’t expected to commence until the second half of this year.

The new TT rides on VW’s MQB platform, and is therefore 50 kg lighter than its predecessor. The sportscar was announced only with four-cylinder engines, two petrol and one diesel.

Two transmissions, a 6-speed manual and 6-speed S-Tronic DSG, are available, while AWD is available as an optional feature.

Thanks for the tip Ritesh!