Indian Autos Blog has been closely following the Ssangyong Korando C facelift bringing you images of the camouflaged test mules.

In our last post, the Korando C facelift's rear was undisguised and we were able to take a look at the reworked taillights. Here are some fresh spy shots which show the front of the car and thus reveal the facelift completely. The headlights of the facelifted Korando look good compared to the pre-facelifted car. There is much more attention to detail and the Korando looks almost European. It seems as though the Ssangyong designers have also incorporated a set of daytime running lights in the facelift.

The side profile of the Korando remains identical to its predecessor. Though we're not sure we can say the same about the interiors.

Under the hood, the Korando facelift is expected to continue using the 2.0-liter diesel engine which is available in two states of tune - 149PS and 175PS. There are two gearboxes on offer, a 6-speed manual or a 6-speed automatic transmission. 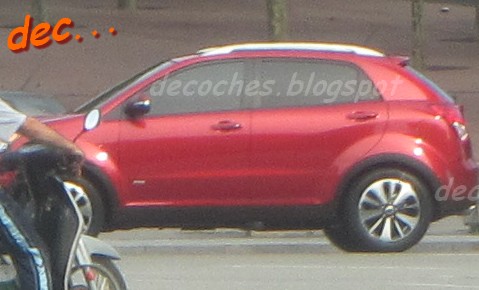 The 2014 Korando C should be officially announced soon. Until now, Mahindra has not shown any clear indication of launching the Korando here in India and we thought this was because of the fact that the car was due to be updated soon. So can we expect the 2014 Korando in India?