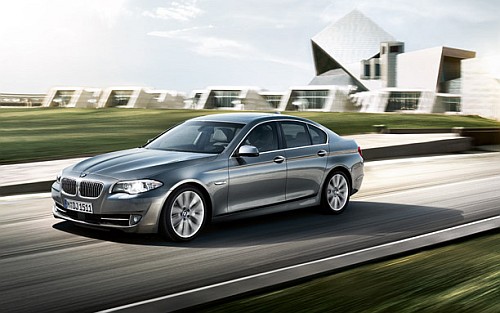 The all new sixth generation BMW 5-series has been launched in India and the bookings are open. BMW India would begin assembling the 523i, 525d and the 530d at its Chennai plant soon by the end of this month. The top of the line 535i would come as a CBU.

Recently i had a brief yet exciting encounter with the all new BMW 535i. The car came in a beautiful mild metallic chocolate color, which BMW calls the 'Havanna'.

Exteriors:
The car look absolutely stunning and pictures and prints do not do justice to the car's looks at all. The car looks elegant and beautiful. Note that these are words which we wouldn't generally associate with a Bimmer. The car looks less sporty and the missing 'Eagle Eye' really irks me. But the car's relaxed flowing lines makes you instantly forget the sportiness of the Bangled previous gen 5-er.

The twin corona headlamps get a whitish light which looks damn beautiful. The sides of the car are typically BMW with a prominent ridge running all the way from the front to the rear. The rear of the car isn't very exciting and could often be mistaken for the 3-Series. Though the cars tail lamps lights up in a brilliant pattern tp distinguish the 5 from the 3.

Interiors:
The interiors of the new 5-Series are gorgeous and reek of luxury. The contours of the dash, the center console and the armrests are all designed to match the ambiance of the 7-Series. I would say the 5-Series' interiors are better than the 7's. The driving position is excellent and all the seats offer good comfort and the plushness of the cabin is something I can't stop crying about.

The instrument panel is neatly laid out and is very legible, I didn't like the orange backlit instrument pods, I would have preferred white lit pods. The steering wheel is finished brilliantly and feels chunky and nice to hold. The paddle shifts however are not that exciting and feel quite rubbery to use.

The rear seats are extremely good and there is nothing which i can complain about but tall figures wouldn't be as happy as I am at the back.

First Opinion:
With the 2010 5-series, BMW has raised the benchmark for cars in this segment. BMW has clearly made the 5-series a luxurious saloon and has attempted to make the 5-series as opulent as possible and has succeeded.

The BMW 5-Series was brought in a haste to dampen the W212 Mercedes Benz E-Class' party which went off to a flying start. Though BMW launched the car in India, it couldn't deliver cars as their plant was ready. As of now the 5-Series has started of with a few numbers and the waiting time for a BMW 5-Series is roughly 3 months now compared to a months time for the new Mercedes E-Class.

So once BMW starts assembling its cars and boosts production numbers, BMW 5-Series sales could pick up. This car is very potent and if BMW India manages faster on-time deliveries, the Bimmer clearly would have the advantage over the Merc at the marketplace.