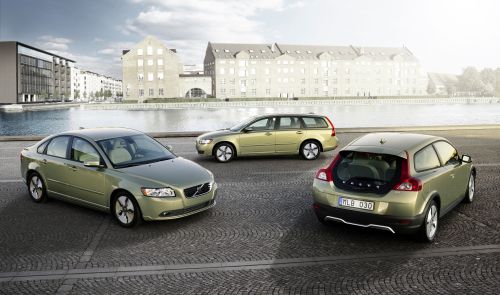 If you are a routine reader of IAB, you would understand that we love Volvo, purely because they never compromise on Safety, no matter in which market they sell their products. Right from the base model to the top-end models, every car would have the same set of safety features, which speak volumes of the company's attitude.

At this year's Paris Motorshow, which is scheduled to be conducted on the first week of next month will see the company's new range of diesel engines. The S40 and the C30, which will be available in India soon, will see ultra-efficient and eco-friendly diesel engines. Volvo wants to stray away from the orthodox practice of equipping small cars alone with clean diesel engines, and thus this move of giving the sedans and the big hatch with such engines.

Termed DRIVe, the technology is so modern that fuel consumption figures will make the average Indian's day-just 4.4 litres/100 km (C30) or 4.5 litres/100 km (S40 and V50). The parallel CO2 figures of 115 and 118 g/km, which give the cars the title of 'cleanest' in their relevant segments. Apart from the engine change, appearances have also been mildly altered with new bumpers and grilles. Can we expect to see the same engines on the S80, which is sold here in India in a short while? We don't know, but we're optimistic.

Continue reading for the Press release, images and the comments by the Volvo spokesperson.

At Paris Motor Show in early October, Volvo Cars is presenting economical new diesel variants of the C30, S40 and V50 models with fuel consumption of just 4.4 litres/100 km (C30) or 4.5 litres/100 km (S40 and V50). The corresponding CO2 figures of 115 and 118 g/km mean that the C30 and V50 have best-in-class CO2 emissions in their segments. All three models - the C30, S40 and V50 - are equipped with a special set of efficiency-enhancing features and marked with the DRIVe emblem to signal their uprated environmental properties.

The DRIVe models are based on the Volvo C30 Efficiency concept car that was shown at the Frankfurt motor show in October 2007. The measures adopted to reduce CO2 emissions that were presented then will be in production before the end of the year in the C30, S40 and the V50.

“We wanted to demonstrate that low CO2 ratings are not solely the preserve of small diesel cars. By offering the Volvo V50 with emission levels below 120 g CO2/km, we are also making it possible for families and other customers who require extra space to make an active pro-environmental choice,” says Volvo Cars President and CEO Fredrik Arp.

Holistic approach to eco-performance
The reduction in fuel consumption and CO2 emissions was brought about by meticulously analysing the cars’ total potential for more efficient, more economical driving. The cars were then optimised within four distinct areas:

* Chassis height reduced by about 10 mm. Same comfort setting as the standard car.
* Spoiler at the front, the same as on the T5 (S40 and V50).
* Covered radiator grille. Behind the characteristic Volvo grille there is a wind-deflecting panel that provides better aerodynamics inside the engine compartment.
* Wind deflectors in front of the front wheels.
* Aerodynamically optimised wheels of special design. Available in 15 and 16 inch sizes.
* Underbody panels for more efficient airflow under the car as well (C30).
* Unique rear spoiler (C30). The S40 has the same spoiler as the T5 and D5 models.
* New rear bumper (C30).

* All the cars are equipped as standard with a new generation of Michelin tyres with low rolling resistance. Available for 15 and 16 inch wheels.

* Gearbox with altered ratios for third, fourth and fifth gears.

“Changing the transmission oil gives us a 0.75 percent lower fuel consumption. Tyres with low rolling resistance save another two percent. Each of these measures may seem rather modest, but it is important to look at the whole picture. Taken together, all the small adjustments have helped us achieve our aim, with emissions below 120 g/km for all three cars. Without in any way compromising on either driving properties or comfort, which was an important requirement,” says Magnus Jonsson, Senior Vice President, Research & Development at Volvo Cars.

Volvo C30 best in the ECO test
Volvo’s DRIVe cars are all certified according to the mandatory European NEDC standard. In addition, the Volvo C30 has excelled in the ECO test, which carries out even more comprehensive measurements of CO2 and particulate emissions. This certification process relies on stars and points, in a similar way to the EuroNCAP programme for safety. The independent ECO test places the Volvo C30 at the top of its size category, with four stars and 76 points in the overall assessment of the car’s total environmental performance.

Benefits for the environment and economy
Reducing fuel consumption and dropping below the 120 g/km CO2 emission level offers a range of benefits, both for the environment and the buyer’s economy. With lower carbon dioxide (CO2) emissions, these cars reduce the net contribution to global warming. All new diesel models from Volvo are also fitted with a maintenance-free particle filter that traps about 95 percent of all soot particles.

With the cars’ good environmental performance, the driver can count on various financial incentives in the form of subsidies in the 13 European markets that have implemented a CO2-based vehicle taxation system, for instance with a “green grant” that is paid to the owner, lower road tax, registration tax exemption or other similar forms of financial encouragement.

Rising fuel prices also make our 1.6D DRIVe offer very attractive. The fuel consumption has been reduced by 0.5 l/100 km and is as low as 3.7 l/100 km at highway speeds.

Sold throughout Europe
“We will offer our diesel-powered DRIVe cars throughout Europe, even in countries that today do not offer any form of financial incentive. We are doing this to give everyone the opportunity to choose a pro-environmental alternative from Volvo. For us it is not simply a question of short-term sales - it also clearly shows how strongly Volvo prioritises environmental properties throughout the product range, both today and for the future,” says Fredrik Arp.

Volvo Cars expects to sell over 20,000 1.6D DRIVe cars next year in Europe. Sales are expected to spread fairly uniformly throughout the region, with France, Sweden and Spain accounting for most sales. The reason for this is the particularly favourable terms offered to buyers in these countries.

The price supplement for the DRIVe package is estimated at between 150 and 450 euros depending on model and market. The DRIVe cars can be specified with most of the options and accessories that Volvo offers, apart from those that affect the cars’ aerodynamic properties.

“The higher price must be regarded as particularly modest bearing in mind the advantages the customer gains in the form of environmental incentives and reduced fuel consumption. We also believe customers will appreciate the opportunity to tailor their DRIVe car by choosing from the wide range of options available,” adds Fredrik Arp.