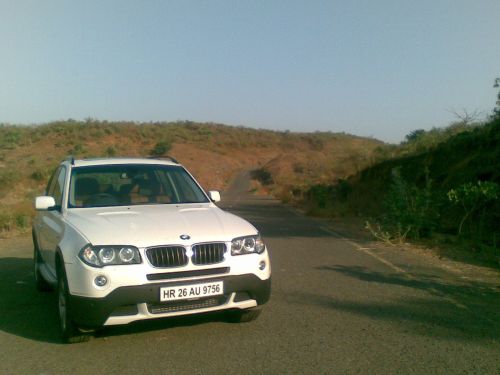 Now, once that we are through the prism of the recession, lifestyle choices that once seemed so vital now really don't seem to be that crucial and this message has been picked up correctly by a lot of car makers. It's time to cut the fat and bring to size cars that have bloated out of proportion and according to me, just don't make a lot of sense.

Big humongous SUV's that will live their entire life on the road rather being off it are more of a lifestyle statement and of late, a lot of car makers are trying to cut this statement short.

Behold the BMW X3 diesel, effective, with all the meat without that extra cheese, it is shaped and downsized keeping its elder siblings, X5 in mind. Even though BMW wouldn't possible know of the impending recession, the X3 diesel makes more sense in India now than ever!

With just the 2.5-liter petrol on the price list, the mini-SUV from the BMW range was beginning to have rough times selling good numbers. The only way BMW could pull the X3 out of the hole it was digging itself now was by introducing the diesel motor that was more fuel efficient and appeared eco-friendly and is cheaper choice in the long run.

It needed to drive well, which it did as we explain later in this review and had to offer something new to customers which wasn't very far away from the petrol model.

BMW has always been gracious with the use of high quality and grand materials. The finishing and feel is very rich. The cabin is similar to the older generation 3-Series and come in a combination of beige leather and black plastics which speak of quality.

The seats are comfortable and both the front seats are electronically controlled. The interior is, like every other BMW, is driver oriented. The steering is adjustable for rake and reach and the intuitive buttons for controlling features like the air-conditioning and the stereo have a premium feel to it with.

The X3 however is cramped at the rear in terms of leg and kneeroom. Two adults fit in comfortable at the rear and even if you manage a third occupant in the middle, the central tunnel and the shape of the seat will leave him complaining.

Storage space in the boot isn't a problem with no less than 480 liters of cargo space which becomes a whopping 1560 liters with the rear seats folded. So far, the X3 may look like a charmer. Well no, our protagonist is not without reproach. A full size spare wheel is absent and it replaced by a ridiculous space saver which serves no purpose at all, especially in India.

The remarkable iDrive is also absent on a car which costs over 45 lakhs, a feature present in the much less costing 3-series.

The engine and the transmission are the joysticks of any vehicle. On the X3 diesel, you have the two-liter 178PS engine and its third generation variable geometry turbocharger, an intercooler and common-rail direct-injection giving the necessary propulsion.

Interestingly, the same engine also powers the new 3-Series, the 320d Highline. The differences are minor but the differences are major. With seven extra horses and a higher common-rail injector pressure of 1800bar instead of 1600bar the final numbers are sufficient to a car of this size - 178PS at 4000rpm and an impressive 350Nm at 1750rpm. The torque is available way down the power band and which improves drivability in stop-go city traffic.

The diesel is mated to a six-speed Steptronic automatic box which responds extremely quickly. Shift into manual mode and the vehicles lets you to stay in a gear for a little while longer to satisfy your desires that road users classify as unwanted.

The diesel engine produces ample torque however a low ratio box is left desired, since a combination of torque plus low ratio box could have made it an off-road wonder.

The X3 diesel also comes with the trademark xDrive. It is BMW's permanent all-wheel drive system which, under normal circumstances, splits power between the front and rear axles in a 40:60 ratio. The ratio is a variable influenced completely by the road terrain and driving conditions at that time. The ration changes to 0:100 when the car hits the 180kph mark, explains our passenger who's a BMW expert.

He explains further - The xDrive studies the car's behavior and takes necessary steps to keep the driver in control all the time. At the first sign of understeering, power distributed to the front axle minimizes. If over steering is detected, the front axle gets all the attention from the xDrive. These actions are performed in a split second and you feel like a WRC champion steering hard and fast through those tight corners.

The X3's behavior on road is crisp, fluid and clear. While off the road, it loses its finesse for lack of a height. The novel ‘hill descent control' technology instills high level of confidence while maneuvering the cars down a steep hill of blind downhill spots.

The X3 is highly appropriate and safe on the tarmac with car like handling and dynamics. It is enjoyable and effectual on winding roads and very nimble in the city.

Wider wheel arches and wide 17 inch wheels give you an idea of the X3's mud plugging capability but if only the clearance between the wheels and the wheel arch's was ample and if only the tyres weren't outright low-profile street tires.

The highest quality of the X3 is undoubtedly its dynamic behavior and its traction system xDrive which prevents the overly-enthusiastic driver from making a glorious mess of things. Suspensions are well balanced but stiff if you ask me. This however results in the X3's razor sharp handling (for a SUV, mind you).

This car is no off-roader and is at home on the streets. Though some mud plugging is advisable, serious off-roaders should look elsewhere (Montero, anyone?). In dynamic driving situations, this is the SUV to have. The torquey diesel mill and the fabulous xDrive really get things right.

But steep pricing (though a lakh cheaper than the petrol), tight interior along with a rough leaves a lot to be desired in terms of comfort. If you can afford it and want your SUV (SAV in the BMW dictionary) to perform like a sedan, this car is for you.

Oh! And we forgot to make a mention of the fuel efficiency. After a day of driving, the overall mileage we recorded was around 10 kmpl which is decent for a car of such dimensions.