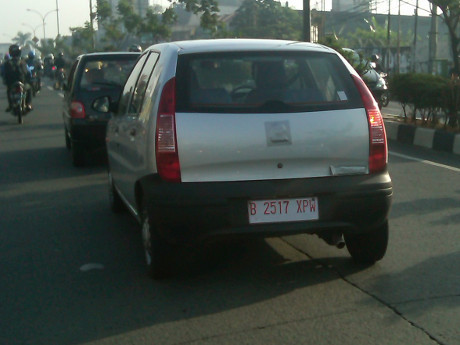 While the entire lineup of passenger cars and some commercial vehicles were on display, the Indian automaker is reportedly concentrating on its Indica to make the inroads.

Mr. Ahmad, a reader of Oto.detik.com, has spotted this uncamouflaged test mule of the Tata Indica in the city of Depok, only the badges were covered. The black bumpers and the steel wheels suggest that this is an entry level variant.

The Indonesia bound vehicle is most likely to be a petrol variant. The Indica in its petrol avatar comes with a 1.2 litre motor which puts out a modest 65.3 bhp. The transmission is a 5-speed manual. The petrol variant of the car is no longer featured in the company's official website for India.

Tata Motors hopes that their new venture in one of the promising auto markets of this region, will bring the much needed volumes to the table. However it remains to be seen whether the company will be pitching the Indica as an LCGC (Low Cost Green Car) contender, because in order to be eligible for the LCGC program, the car needs to be locally produced.

We expect the Tata Indica to be considerably cheaper than popular hatchbacks like the Nissan March (Micra), Honda Brio, Mitsubishi Mirage, etc.

Given that the tests are on, we could expect a launch anytime soon.