Was previewed by the Hexa concept displayed at the 2015 Geneva Motor Show.

Tata Hexa, the Aria-based SUV, has been caught testing by a Motor Octane reader, revealing the side and rear structure of the car for the first time. The SUV was previewed by the Tata Hexa concept displayed at the 2015 Geneva Motor Show and is likely to debut at the 2016 Auto Expo in February.

The SUV gets its name from the six seats that occupy the cabin, and will be the company’s flagship. The fascia though not seen in this spyshot, gets a flat bonnet, honeycomb mesh grille and projector headlights. The sides get flared wheel arches, indicators integrated into side mirrors and new alloys. The rear seen in the spy images gets a subtle tail gate spoiler and dual exhausts (seen on the concept too).

The interior will get six captain seats, the Bolt's steering wheel, a new center console as well as AC vents for the second and third row. Entertainment will likely be provided by Harman via a centrally-mounted touchscreen having Bluetooth, USB and AUX connectivity. Safety features such as six airbags, ABS, EBD, ESC, TCS four disc brakes from the Aria are likely to be transferred to the Hexa. The Geneva show concept interestingly also showed a terrain management system with Auto, Comfort and Dynamic settings. 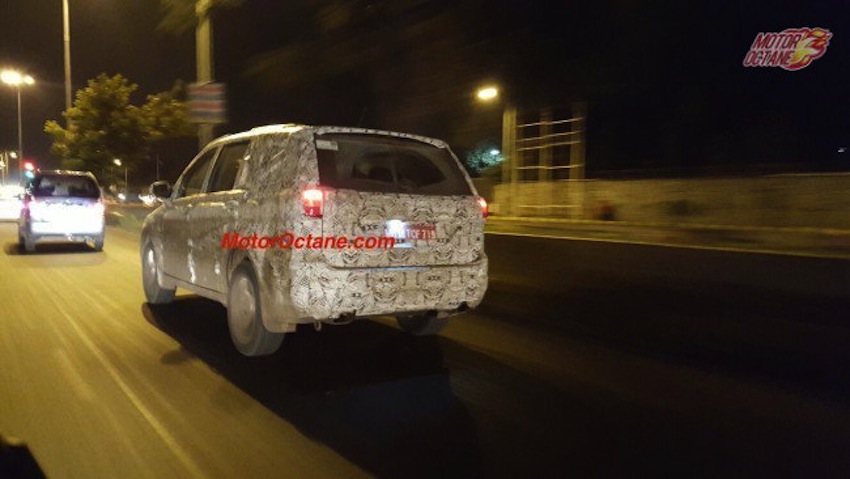 Also Read: Tata Xenon to get new chassis next year

The Hexa concept featured the 2.2-liter VARICOR 400 diesel unit that has a maximum output of 154.2 bhp @ 4,000 rpm, and 400 Nm @ 1,700 - 2,700 rpm, which should apply to the production model, but sporting a higher fuel efficiency and top speed than the Aria. The current gearbox, a 6-speed manual unit, will be carried over, while a report said that a GM-sourced 6-speed automatic would be optional.