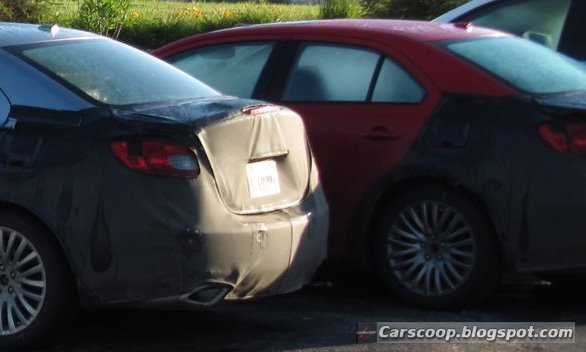 Three lightly camouflaged Suzuki Kizashis were spotted outside a Kansas hotel by a Carscoop reader. This time around, the cars interiors can be viewed in greater detail.

The Speedo and Tachometer are set deep, much like Alfa Romeo instrument panels. The knobs and buttons are quite well organised, but confined to the center stack.

There are a few chrome bits running accross the beige dashboard, lending an upmarket feel to the interiors. The quality of plastics used looks better than in other Suzukis.

Infact, this cars does not have many things in common with its sibbligs like the SX4 and the Swift viz a huge departure from what Suzuki normally does. Did you notice the multispoke alloys?

Not much has been spoken about the engines. But we hear that a 300HP 3.6-liter V6 will be introduced in one of three variants. The Suzuki Kizashi wll be officially unveiled before the end of the year.