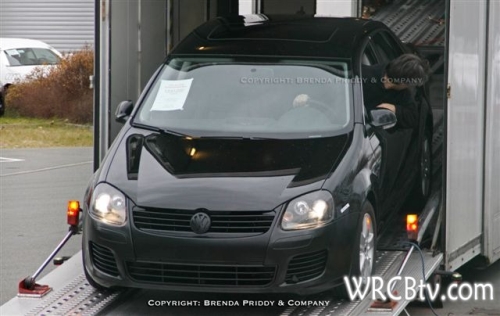 At first glance this car looks an awful lot like a next-gen VW Jetta both in shape and size, but the piece of paper on the windshield reads "VW 411 NMS" - which means, this is a 'Test Mule*' for VW's NMS (New Midsize Sedan) development. This supplements Volkswagen's recent announcement that will build a new mid-size sedan(NMS) aimed specifically at the US market. In fact, this is the very first Test mule* photographed.

This image was captured few days back in Germany as the car was being loaded on to a truck after testing.

This vehicle is built on a stretched Jetta chassis which includes some components(mainly engine and transmission) of the new midsize sedan (NMS) being tested. This however is not the final design, as the designing is in the developmental stages. This car will be built in Chattanooga(USA) before 2011after undergoing thorough revisions and passing all State and Federal norms.

Apart from the North American market, VW will be also prepare variants for the Asian markets like China and India.

The Main Features of the NMS include:

*Test Mule: It is a vehicle equipped with experimental or prototype components in an existing platform/chassis for testing. Built before a full pre-production model in order to find problems. They are drivable but are not the final version.