Toyota has started testing the Etios Liva hatchback in Indonesia suggesting that the Japanese auto giant is considering to launch the car there soon.

A good share of Indonesia's population will reach the car-buying infliction point in this decade. Tata is leaving no stone unturned to give the Nano the best chance in Indonesia in the coming years. Renault-Nissan's head honcho Carlos Ghosn launched the Datsun brand of low cost cars this year specifically for Indonesia, India and Russia.

The budget of the average Indonesian family car buyer is no bigger than the average Indian's. Thus it is the A- and B-Segments that are vast as those cars are easy to buy, run and maintain. 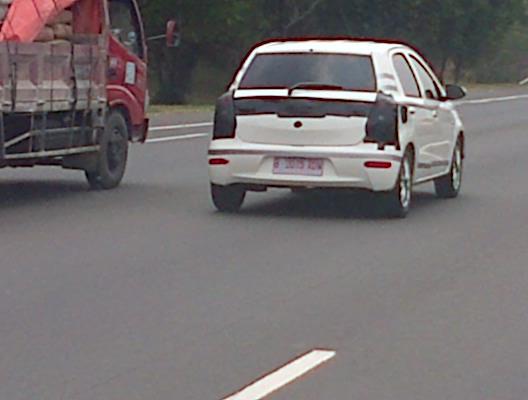 The spy video of the test mule was recorded by Mr. Ahmad Rizki while the photos belong to Mr. Jagorawi, readers of TMCBlog.com.

The test mule spotted in Indonesia is identical to the Indian Etios Liva and if launched there, the cars could be shipped from India either as CBU or Toyota could assemble the CKD kits at their Indonesian subsidiary Toyota Astra Motors (TAM). Toyota exports 20,000 units of the Etios to South Africa annually.

The Etios Liva will sit above the Toyota Agya small car which was showcased at the Indonesia Motor Show last  month. The Agya is a car built as per Indonesian government policy for 'Low Cost Green Car' (LCGC) to avail tax benefits.

The Etios Liva is expected to use the same range of powertrains as in India. The 1.2 litre petrol motor generates 8o PS while the 1.4 litre diesel motor is a de-tuned version of the engine which is also shared by Corolla Altis and Etios sedan and puts out a modest 68 PS.

The Etios Liva is expected to launch in Indonesia in next year and the estimated price range is 120 million to 170 million Indonesian Rupiah (around Rs. 6.7 lakhs to Rs. 9.5 lakhs).