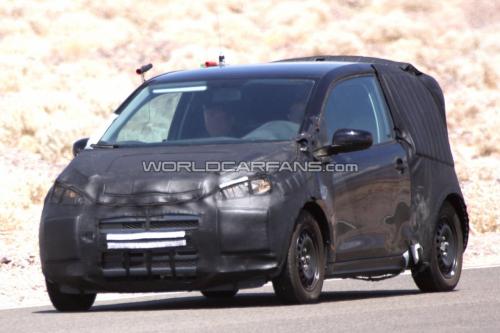 The first full body prototype of the VW Lupo here in India by the end of 2011 has been caught testing in America. The sub-Polo hatchback will make use the Polo's 1.2-liter diesel and petrol engine. The entry-level model could have a sub 1-liter petrol engine.

Internationally you can buy the Lupo with VW's 1.2 TSI engine that will make this car a blast to drive. Unfortunately in India this car is positioned to fight for volumes with the likes of the Suzuki Alto, Hyundai's HA and Chevrolet's Spark.

VW has done a good job of camouflaging and adding fake spoilers to prevent us from deciphering the car's design. We speculate the Lupo's design will be a mix of the i10 and Polo. The Lupo will be manufactured at VW's plant in Chakan, Pune.

Click here to see an artist's impression of the VW Lupo