Skoda is upgrading all models to align them with their new corporate identity. The Skoda Yeti is the next model to face the scalpel after the Skoda Superb which was unveiled on the eve of Auto Shanghai 2013. 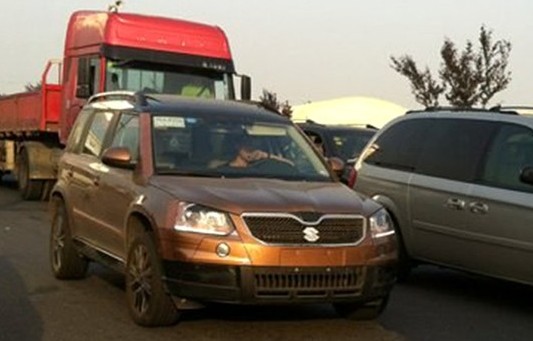 We have brought you many spyshots of this updated Skoda Yeti testing in China. The latest example wears decoy body panels that mislead onlookers to think of it as a Suzuki Grand Vitara. It even wears a Suzuki badge in an attempt to confuse the beholder!

However, the front fascia of the car is unmistakably Skoda. The facelift is characterized by an edgy design. Headlamps have become angular and the new signature Skoda grille sits atop the revised apron. Just like on the new Octavia and the Superb facelift, the winged arrow has moved to the bonnet.

As previous spyshots suggest, the rear undergoes a comprehensive makeover. Skoda may add a spare wheel to the tailgate.

The Skoda Yeti spotted testing is a long wheelbase version exclusive to the Chinese market. The Chinese version has a wheelbase of 2,638mm while that of the European version is 2,578mm.

The current Yeti is being imported into China as a CBU but the facelift will be produced by the Shanghai-VW JV. China is expected to get it only with the 1.8L TSI engine.