Although India is maturing to sedans and SUVs in the C segment, the B segment constitutes at least 70% of the auto market.

[can't view the video above? Head over to Youtube]

The small car segment can literally make or break a manufacturer over here. The best examples are Ford Figo and Chevrolet Beat that are bread earners for their respective makers.

Though Nissan has been operating in the B+ segment with a diesel car for over two years, it has not managed to cement its position there. The Micra slipped to three digit sales in the last three months of 2012, and since the Pulse came along at the 2012 Auto Expo, the Micra's had to battle with cannibalization to some degree as well.

More importantly, it has not managed to put Nissan ‘on the map’ like its sedan sibling Sunny.

So Nissan India is trying again apparently with a cheaper variant to compete directly against the Hyundai i10 and the Honda Brio. 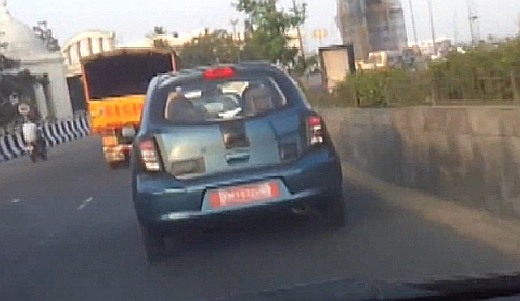 This cheaper Micra that is learned to bear the 'Micra Active' badge was spotted by Indian Autos Blog reader Dr. Kumar in Chennai. The camouflage on the tail lights suggests a new tail lamp cluster, but we're told there are no cosmetic changes on the cost-down variant.

Some components of the car have been localized, and certain features and sound deadening materials could be deleted to attain a lower price band.

Would that make it a tempting proposition for you?