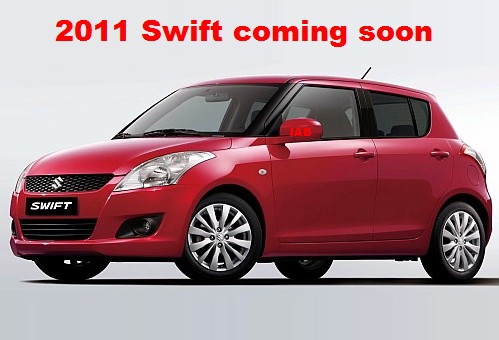 The next generation Suzuki Swift would soon be launched in India following its international launch scheduled for the Paris Motor Show in October 2010. As of now the car has been unveiled only in Hungary.

Suzuki has revealed the engine options for the 2011 Swift, a new 1.2l VVT engine petrol producing 93 bhp and the existing Fiat sourced Mutijet 1.3 DDiS diesel would be powering the Swift. CVT automatic transmissions would also be offered.

For India, the 1.2l K-series engine producing 84 bhp and the 1.3l DDiS diesel would stay. Maruti Suzuki India could also bring the VVT 1.2l engine. Maruti would be skeptical about offering an automatic tranny on the new Swift but we expect it could follow months after the car's launch.

When Indian Autos Blog inquired about the new Swift selling alongside the current model, Maruti Suzuki didn't reveal anything but hinted that the newer generations would be replace the old.

Going by BS Motoring's report, we expect Maruti to launch the 2011 Swift in India by the first half of 2011. But considering strong threats from the Ford Figo and the upcoming Chevrolet Beat diesel, we expect Maruti Suzuki to bring in the new Swift by March 2011.