10 exciting modified Maruti Suzuki Ciaz sedans from around the world

During the days of the SX4 and the Baleno, it was hard to imagine a Maruti sedan that would comprehensively outsell the Honda City on a regular basis. In the present scenario, however, the Ciaz, which is the company's third attempt at a C2-segment contender, has been more popular than the traditional best-sellers City and Verna. Thanks to its high popularity, there are several modified examples of Ciaz around the globe. Here is a look at ten exciting modified Maruti Suzuki Ciaz sedans - Modsters Automotives, an upcoming car modification house based out of Chennai, has given the Ciaz a touch of aggression through a set of styling updates. While the customised sedan looks hotter than the regular version, it's noteworthy that the modifications are quite subtle in nature. The front-end of the sedan features new headlamps that carry dual projector setup. The front fog lamps have received the LED treatment, while the chrome-heavy stock grille has made way for a wire mesh unit. Other than this, the bumper carries a discreet front splitter, and the regular wheels have been replaced with aftermarket multi-spoke units. Finally, the roof has been given a gloss black wrap. 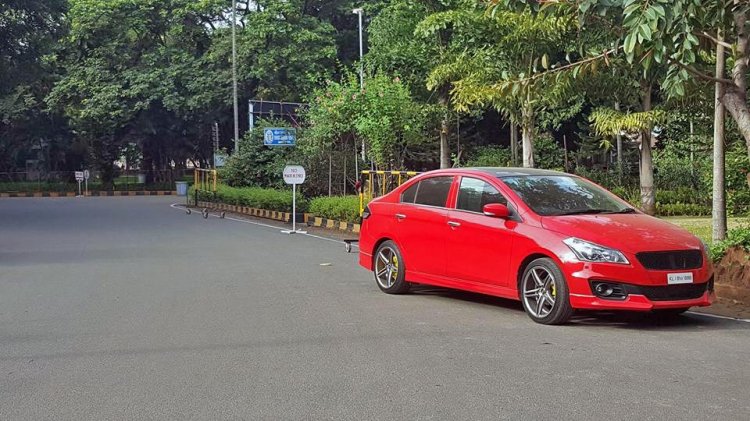 While the Maruti Ciaz is high on comfort and refinement, it's far from being a driver's car. The red custom Ciaz from Kerala, however, seems to harbour sporty aspirations. Its bright red base paint with a matte black roof gives it a sporty look. Furthermore, the 'chrome-delete' treatment for the grille and five-spoke alloy wheels shod with lower profile tires complete the car's hot new look. Here is another custom Ciaz from Kerala. While the pre-facelift Ciaz looked quite attractive with the body kit that was available on the RS variant, the owner of this sedan from Kerala has slapped on a sportier set of updates on his car. At the front, it offers bumper skirts and a prominent spitter. In the side profile, it features aftermarket multi-spoke negative offset chrome-plated alloy wheels shod with lower profile rubber. Furthermore, this Ciaz receives window visors and bold side skirts. At the rear, it flaunts a lip boot lid spoiler. Other updates include chrome garnish for foglamp enclosures, updated interior upholstery, and a black roof wrap. While the Maruti Ciaz does well with a long wheelbase and comfy rear seat, it just can't match the kind of experience a luxury car offers. This modified model from Thailand, however, tries to mimic the mid-size Bimmer by featuring a similar grille. It also gets an updated bumper, matte black roof wrap, and side skirts. Furthermore, it rides on 5-spoke alloy wheels shod with low profile tires. Here is 'Golden Eye', a custom Ciaz from Modster Automotive that features an Audi-esque front grille, updated headlamps, and a sporty front bumper. The headlights feature a custom projector unit each along with halo rings and LED DRLs. In the side profile, it features blacked-out side skirts, while the roof and the pillars are covered in matte black wrap. At the rear, the car gets custom tail lamps, an updated bumper, and a lip spoiler. Furthermore, the roof gets a golden shark fin antenna. The custom Ciaz by 360 Motoring has to be the hottest one we've seen. It carries a host of visual updates that come together to lend this sedan a very sporty look. The highlight of the front-end is an Audi-esque grille, which is flanked by updated headlamps and large air dams. In the side profile, it rides on aftermarket deep-dish alloy wheels. Moreover, the car carries a wide body kit, which gives it a more planted stance. The rear gets a GT wing, updated tail lamps and a new bumper. Another talking point is the Audi's Samoa Orange-like base paint. Here is another Ciaz from Thailand that looks sportier than the regular version owing to several styling updates. Its front end features a new grille, bumper skirts with LED DRLs, and updated headlamps with an LED strip each. The side profile gets side skirts and window visors. Another visual update comes in the form of matte black roof wrap.

Another Modified Ciaz from Thailand This Ciaz here has a custom body kit to add to the sportiness. The package includes a new front bumper with front skirting which gives the vehicle a new look. The side skirts have a lot more muscle to it. The car has also been lowered, something that does add to the visual appeal of the car. To round things up, the car also gets aftermarket alloys. Here is a 'stanced' Ciaz from Thailand. It rides on aftermarket five-spoke negative offset alloy wheels that wear low profile tires. Other than a lowered suspension, the car even carries a performance-tuned exhaust system. The last example on our list is a low rider Ciaz from Thailand. While white seems to be a favourite paint shade of most Ciaz owners, this car has a grey colour. Other than a lowered suspension, this custom car features a front bumper diffuser and aftermarket five-spoke alloy rims that are shod with lower profile tires.