10 Stunningly modified examples of Maruti Gypsy from across India

Maruti Suzuki has finally pulled the plug on the 'made-to-order' Gypsy, thereby marking the end of an era of one of the most iconic cars to have been on sale in the country. The famous off-roader will continue in listings till 31 March 2019 to clear the existing order backlog. While the Gypsy is a bare-basic mountain goat, with not even an aircon or a power steering, its go-anywhere capabilities, punchy petrol motor, and reliable mechanicals made it a hit among the off-roading enthusiasts and rallyists. Let's take a look at ten of the most stunningly modified examples of Maruti Gypsy from across the country - The modified Maruti Gypsy by Motormind is among the most handsome models we've ever seen. In spite of carrying a plethora of modifications, this Gypsy doesn't look too wild or outlandish. Instead, the orange base paint scheme goes well with the several black bits the custom vehicle carries. The revised suspension, together with new wheels that are shod with huge all-terrain tires, gives this SUV a much bolder stance. Moreover, additions like that of the skid plate, honeycomb grille, plastic moulding on wheel arches, and roof-top LED lights further enhance the overall experience of the customised model. 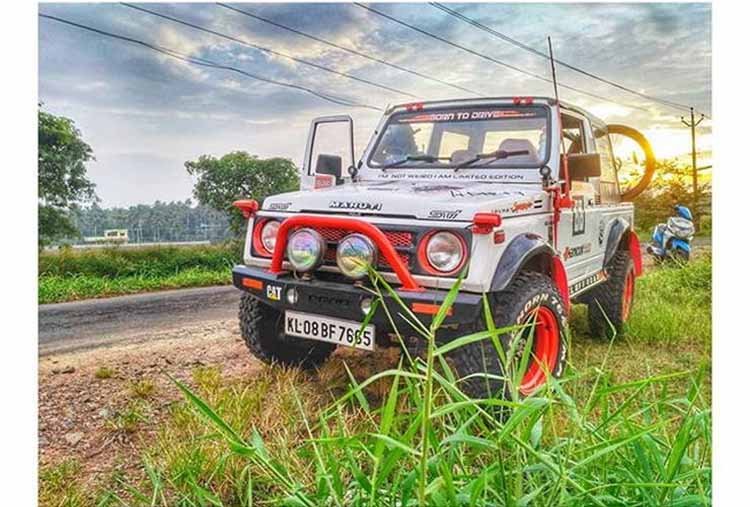 While the modified Maruti Gypsy from Motormind carries some substantial updates, the one above looks good without featuring any significant modification. The highlights of the front-end include an off-road-spec bumper with an orange-colour bullbar mounted atop it. The custom unit even features a pair of auxiliary lamps. In the side profile, the highlights include new rims shod with all-terrain tires, wheel arch cladding, and new ORVMs. The rear-end is characterised by a bicycle-mount. This is by far the most outrageous Maruti Gypsy we've laid our eyes on. The big wheels and tires and the wholly reworked suspension make it look like a menacing monster truck. Other modifications that can be seen on this menacing Gypsy include a new body kit with custom fenders, a revised hood, and wire mesh grille. The revised front bumper carries an electric winch, while a snorkel further enhances the already tall model's water wading capacity. 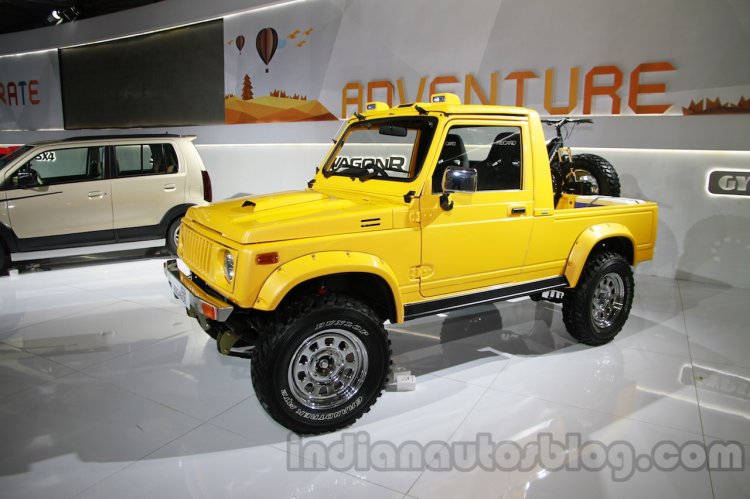 Called the Escapade, this modified Gypsy comes from Maruti Suzuki itself. It was put on display at the Auto Expo 2014 and attracted the audience with its yellow paintwork, a bolder stance courtesy of raised suspension, and bigger wheels and tires. The lifted model features a pick-up body style, with the rear bench seats making way for a flatbed. The modified Gypsy even features a hood scoop and new bumpers. 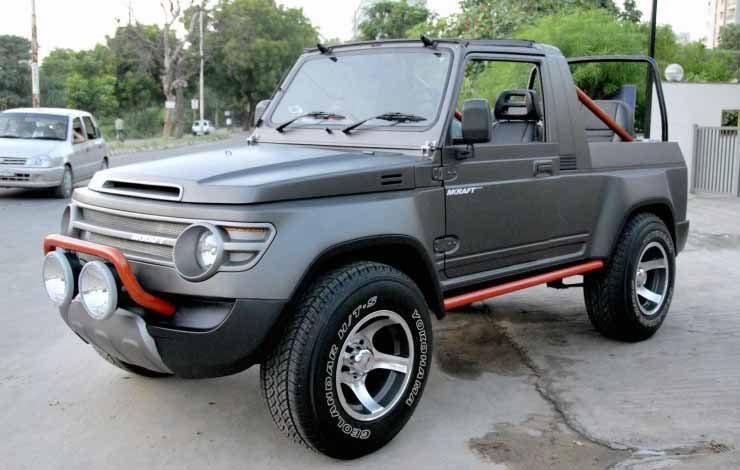 The above modified Maruti Gypsy has been done up by Mumbai-based MKraft. The front-end of this SUV gets a complete makeover with a new bumper, new grille, revised headlamps, auxiliary lamps, and a bull bar. Other highlights include a set of larger front fenders and a matt grey paint job. At the rear, it gets orange-rollover bars. The aftermarket alloy wheels have been shod with Yokohama Geolandar tires. Among the off-roading enthusiasts, the Gypsy is known to be a car that can conquer even the toughest of the terrains. The modified example, seen above, for instance, feels entirely at home on a snow-covered road. Of course, it features many modifications that make it a better off-roader. The front-end gets a new bumper with bull bar and auxiliary lights. The SUV even receives a snorkel to enhance its water-wading capacity. There are several other minor additions, like a set of spotlights at the windscreen level, but the biggest highlight of this Gypsy has to be the raised suspension with larger wheels that are shod with all-terrain tires. 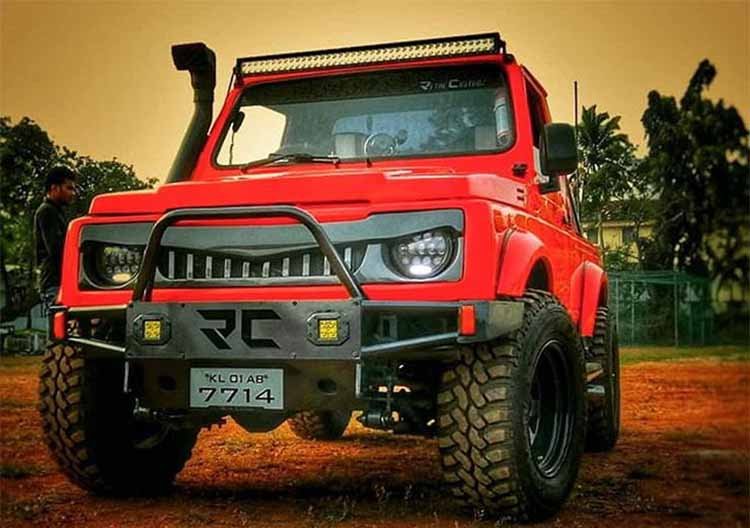 Here is a 'red hot' modified Maruti Gypsy from Kerala that looks quite aggressive with its revamped front-end along with larger wheels and tires. At the front, it carries a new bumper with LED DRLs and a bull bar. Furthermore, it gets a revised grille and hooded LED headlamps. Other bits include snorkel, roof-mounted LED light bar and a bright red paint scheme. 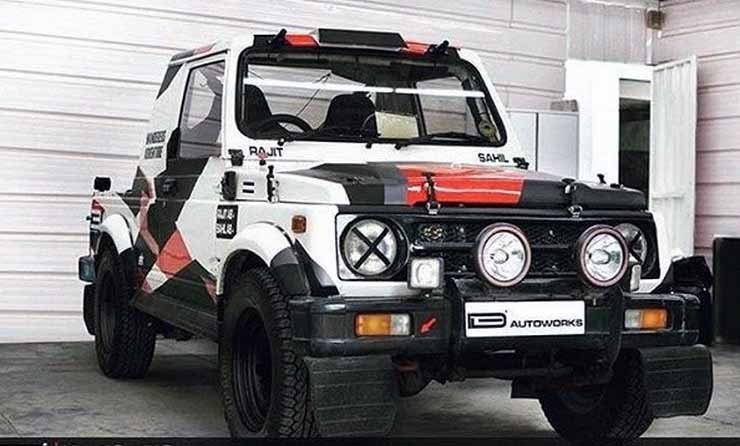 This modified Maruti Gypsy comes from IDE Autoworks, a well-known car tuning house in Gurugram. The custom SUV looks rally-ready with sports seats, driver and co-driver information stickered on various panels, and all-terrain tires. The major highlight, however, comes in the form of its exciting paint job. Other changes that the car gets include LED lights at front and rear, a pair of bumper-mounted auxiliary lights, and a sports steering wheel. 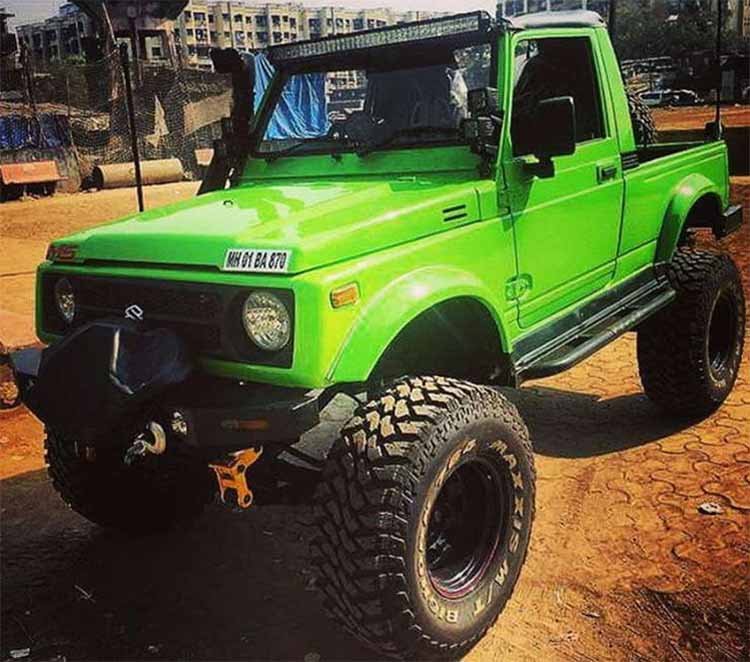 Here is a green-painted monster Gypsy from Mumbai that is said to be inspired from 'The Hulk.' The neon green paint scheme, together with the raised suspension and bigger wheels with off-road tires, gives this SUV a brutish look. In sync with the car's enhanced off-roading capabilities, it has been fitted with towing hooks and a roof-mounted LED bar. Furthermore, a snorkel further enhances the water=wading capacity of the already lifted vehicle. Here is an all-black modified Maruti Gypsy that oozes boldness. The modifications include a raised suspension with bigger wheels and off-road-spec tires, an electric winch, a snorkel, and a roof hood. The front bumper has been completely done away with for a cleaner look, while the side profile receives steps and chrome-plated ORVM caps.