Maruti Suzuki R3 MPV could be launched by mid-2011 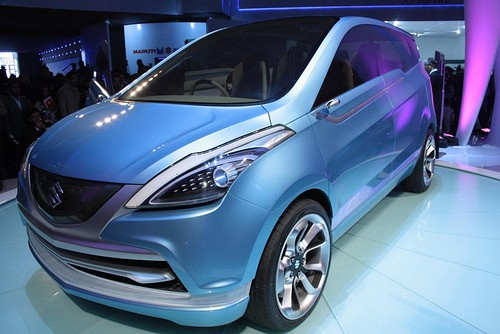 Apart from the small car segment, only the sedan segment was considered lucrative by manufacturers in India. But now with the increasing popularity of the people movers (MPV, mini-MPVs, utility vehicles) in India, suddenly every car company in India is wanting to put one on the market.

Maruti Suzuki India showcased its R3 concept car at the 2010 Auto Expo, New Delhi. The MPV concept car received good response from the public and soon news came out that Maruti would make a 7-seat production version of the R3 concept MPV. Maruti would be looking to launch the new MPV in the first half of 2011.

A team of 20 engineers worked on it (Maruti R3 MPV) with feedback from consumers.

Maruti's R3 MPV would be based on a extended and heavier SX4 platform and could come with the Swift's 1.2 liter K-Series engine or the SX4's 1.6 liter VVT engine.

Also the Maruti MPV could get diesel engines from Volkswagen, thanks to the latter's 19.9% stake in Suzuki. Or Maruti could use the 1.3 liter DDiS diesel engine probably with a VGT (Variable Geometry Turbocharger).

The car could be priced between 6-8 lakh Rupees and would directly compete with the Toyota Innova, the Mahindra Xylos (7-seater and 5-seater), the upcoming Nissan MPV based on the V-Platform (on which the Nissan Micra is built), Ford's B-Max MPV based on the Figo's platform and the probable Chevrolet Orlando.