How about a new BMW 7 Series for 52 lakh rupees?

Do you dream of owing a BMW 7 series or a Rolls Royce Ghost every single day? Of course, you do. Well, then we have some really good news for you.

The proposed India-EU FTA (free trade agreement) is actively seeking the removal of import duties on automotive products. If the agreement goes through, we can expect a drastic reduction in prices of imported luxury cars by as much as 38%. In essence, this means a BMW 7 Series, which now cost about round about 84 lakhs, will get cheaper by around 30 lakhs! 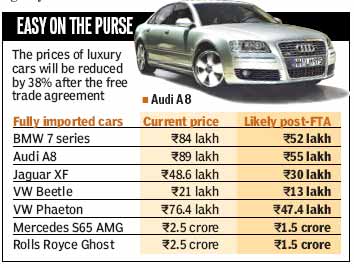 This price reduction is expected on cars that are imported in form of a CBU and only from the European countries. So don’t expect a Mitsubishi EVO to shed its price.

Is the BMW 7 series a bit too steep for your wallet? Interested in the C Class ? There is some relief for you as well. The proposed FTA is also seeking a reduction of 10% on CKD imports as well. But every coin has 2 sides. So there is a negative impact of this FTA as well. An internal report of the European Commission revealed that the FTA would gravely affect the India's car industry. 4% of India's automobile production (Rs 6,000 crore) would move out of the country and would be replaced by cars made in Europe.

So what do you think? Should India sign this FTA?