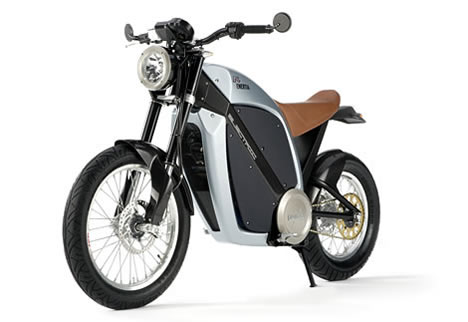 Late last year, we informed you about Honda's Hybrid Motorcycle plans for 2010. Apart from this announcement, Honda had also announced plans of an electric motorcycle and more information is now available.

Honda is targeting to launch a 50km range electric bike by 2010, which apart from civilians will be used by the Japanese postal service to deliver mails.
PRESS RELEASE:

Electric Motorcycle for Honda by 2010

There are exciting plans in the works on the environmental technology front with the announcement by Honda's President and CEO, Takeo Fukui, that the company is currently developing a battery-powered electric motorcycle which emits no CO2 during operation.

According to Fukui, in order for Honda to sustain its business during the next 100 years of the automotive industry, the company will further strengthen its ability to continue advancing environmental technologies and to apply them to creative and attractive products.

Honda believes the characteristics of a battery can be better utilized in the area of motorcycles, which are often used for short distance travel.

In 2004, Honda unveiled a fuel cell scooter prototype in addition to the hybrid scooter and electric moped developed as prototypes for eventual mass production. The Honda FC Stack, which was originally used in automobiles, was applied to the fuel cell scooter, after being made lighter and more compact to
be the optimal size for scooters.

The 50 cc hybrid scooter prototype employs both an internal combustion engine and an electric motor and provides ample storage space.

The electric moped has a built-in 360kW light nickel hydrogen battery inside an aluminium frame. Being powerful enough to climb a 12-degree incline, the electric moped offers performance comparable to that of a gasoline-powered moped.

Honda is aiming to introduce the fully electric motorcycle to the market in approximately two years and envisages it could be viable for commercial as well as individual applications.