Honda Jazz and Hyundai i20 are military tanks, literally ;-) 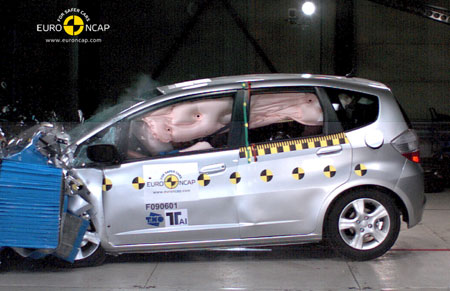 The latest EuroNCAP safety results are out and 5 out of 6 new cars crash-tested scored 5-Stars of which, we're interested in only three cars; Honda Jazz, Hyundai i20, Suzuki Alto/A-Star (the cars sold/yet to be sold here in India).

Euro NCAP’s new rating scheme focuses on the vehicle’s overall safety performance which gives consumers an easy to understand single score. The new system considers passenger protection during impact to the front, side and rear of the car, and pole (if the car impacts with a tree or other fixed narrow object). Child protection, pedestrian protection and the availability of driver safety aids are also considered.

This post is a compilation of crash-test statistics, pictures, videos and some amazing revelations based on the indexes provided by EuroNCAP, car by car. Honda Jazz - possibly the most awaited small car in India. The Jazz remains popular in the European market due to its no-compromise mix of value for money and frugality, combined with the cabin space and flexibility.

The A-Star's 3-star rating shook the Suzuki Head-quarters so badly that the company now offers ESP(electronic stability program) as an optional extra in one of its base models.