Hero Motocorp got the American two wheeler maker, Eric Buell Racing (EBR) on board after parting ways with their long standing partner Honda. Eric Beull Racing, the former subsidiary of Harley Davidson, is now partly owned by Hero Motocorp. EBR's expertise in sportsbike engineering would help Hero to have a say in the rapidly growing premium bike segment in India.

What you see here is the first fruit of the partnership. Gaadi.com's reader Manoj Kandpal has caught two fully disguised test mules in the vicinity of Hero Motocorp's Dharuhera plant in Haryana. The riders were wearing Hero branded jackets which further confirms the bike's identity.

Despite its thick disguise all around, the fully faired sportsbike has a resemblance to the Hero Karizma ZMR but one can't rule out the possibility that the bike is testing with donor parts. 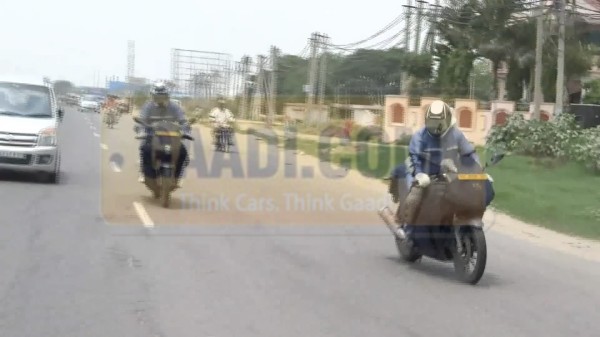 The engine is hidden from view but we reckon that the sportsbike has in its belly a motor displacing not less than 250cc. Going with the segment, we can safely expect a fuel injected, liquid cooled single cylinder unit with a power output more than 25bhp.

While Hero is having an indomitable run in the commuter bike segment, the world's largest bike maker (in terms on volume) is sidelined in the premium segment. The Karizma ZMR, the flagship premium motorcycle from the brand, is left behind by its rivals.

So, can EBR be Hero Motocorp's KTM? Let's wait and watch!