The complex world of BMW was opened to us just a little bit at a tour of the BMW Plant, BMW Welt and the BMW Museum in Munich last month. Here's a first-hand account of how the German manufacturer makes its cars, shows off its history and gives each of its customers a chance to be treated like royalty. BMW's plant in Munich has been rolling out cars since 1922, surviving a World War on the way. The plant, at present, manufactures around 1,000 engines and an equal number of cars every day, in two shifts running for 8 hours each. As the city of Munich has grown over the years, real estate became rare and the plant now travels vertically, standing five floors tall, making it a unique manufacturing facility.

The plant's location also makes it difficult for BMW to keep sending in vital parts for the production. Close to 700 trucks carry around 600 tonnes of components every day and stop at 10 pm.

A total of 7,200 employees work at the plant, bringing the total number of people working in BMW in Munich to around 30,000.

13 km of conveyor belt lines cover the entire plant that sits on a site measuring 500,000 square meteres. While most crucial parts that are required for the car's production are brought in using trucks, seats are made in house and used within 30 minutes.

Most of the plant, however, remains automated. For example, most of the door panel, rear structure and front structure welding are done by robots. 12 robots take 64 seconds and finish 120 spot welds on the above mentioned structures. BMW recently increased the size of its side frame, to make the B-pillar stronger, and this brings with it around 6,000 welding spots and 16 meters of adhesives as well.

The BMW Museum is one of the most sought after tourist spots in the city. The museum shows all of BMW's important highlights, like the first aircraft engine that it made and its first motorcycle. The museum also shows off the one-off BMW 8 Series, the original M1, the five-generations of the 3 Series amongst other exhibits. It also houses a design concept, that shows spherical balls suspended ceilings that are programmed to show the design models adopted by BMW over the ages. The balls rise and lower themselves, standing still for a moment to show a particular design before moving on to the next one. The building also shows the company's main and most successful motorcycle models that are stacked vertically on a wall, along with a special arrangement that shows how the colour preferences of BMW models have changed over the decades.

BMW's brief victories in motorsports have been highlighted as well, with Nelson Piquet's 1983 championship winning car, the BMW powered BMW M12/13 1.5 L4t. The car was also the first turbocharged car to win the title.

The BMW Welt, or the BMW World, houses a different section for each of BMW's brands - the BMW Motorrad, Rolls Royce, MINI and BMW itself. Apart from showing off the latest models in these brands, the building also contains a BMW Shop where official merchandise are sold. 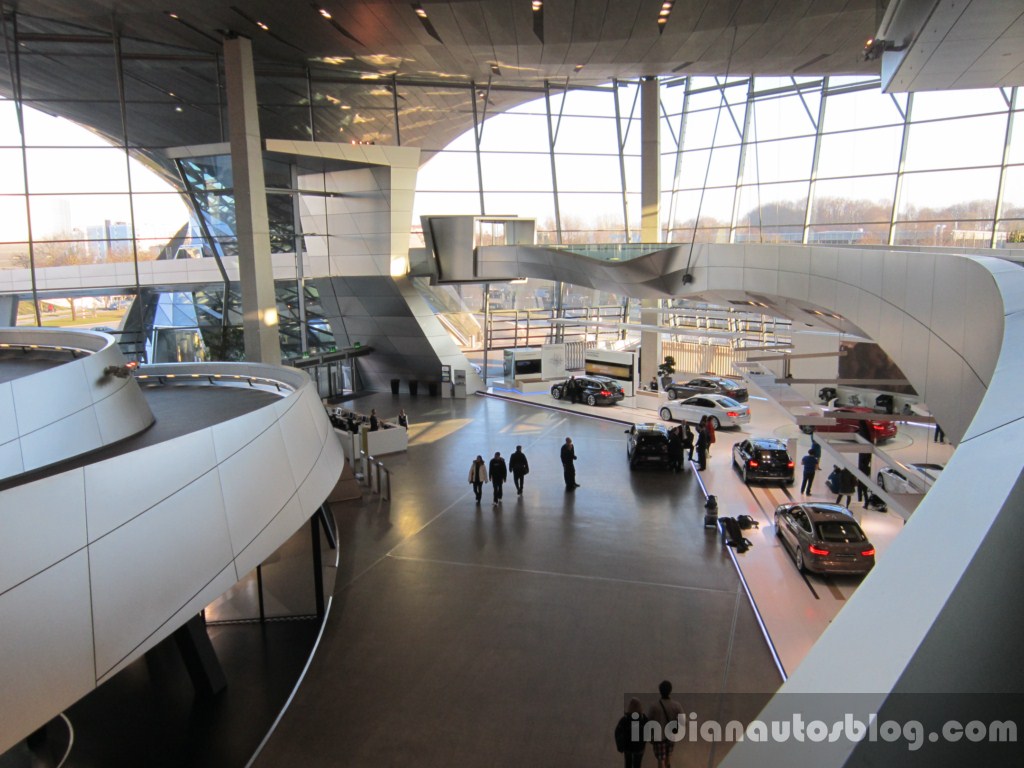 An interesting area in the BMW Welt is the pickup area, where customers from anywhere in the world can come in and take delivery of their BMW product. An average of 160 such personal pickups are made each day.

Since its opening towards the end of 2007, close to 10 million visitors have come over making it Bavaria's largest tourist destination.