Back in November of 2012, BMW announced that it was bringing the BMW 1 Series hatchback to India. Eight months later, here are the first images of the 1 Series testing on the Indian soil.

To put things into perspective, the BMW 1 Series is the smallest BMW car on sale today. The current generation, revealed at the 2011 Frankfurt Motor Show, features a ‘love it or hate it' design language. Given that it was unveiled in 2011, a facelift for the 1 Series is certainly in the works. It remains to be seen whether BMW launches the refresh or the current model. 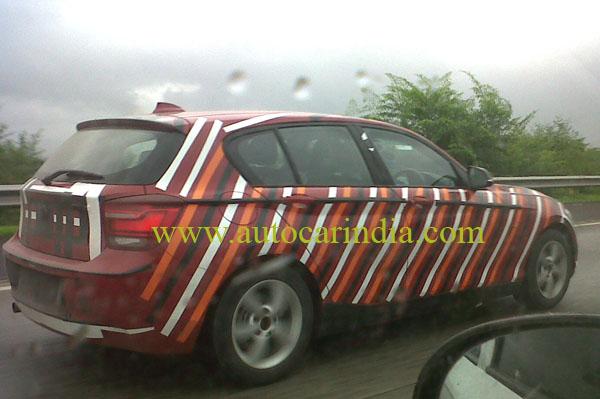 The variant testing here is the five door (predictable because Indians are very averse towards three door variants). It will most likely be presented in two engine options –

The engines will come mated to an 8-speed ZF automatic gearbox.

Although the BMW 1 Series will be assembled in India at BMW’s Chennai plant, we doubt there will be any stripped-out ‘Corporate’ version of the 1 Series. Both petrol and diesel variants will come fully loaded. The gadgets and gizmos would help maintain the premium-ness of the brand.

The 1 Series competes directly with the Mercedes A Class which was launched here just over a month ago. Going by the initial response for the A Class, which saw over 400 bookings within weeks, there are many Indians who don't mind coughing up over INR 20 lakhs for a hatchback, provided it has a particular badge on the grill.

Prices would be in the range of 20-25 lakhs and the launch is expected in September. BMW India has already started its marketing activities for the small car with cricketing legend Sachin Tendulkar approving its handling and brakes.