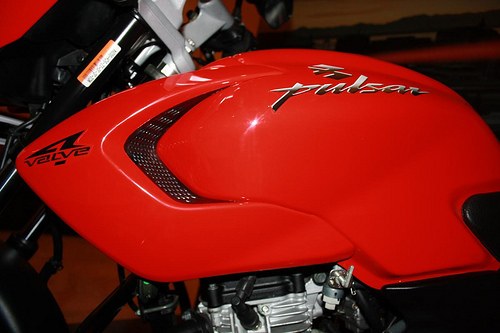 You would have been wondering where today's updates went. I apologize for not keeping you posted. Out of the blue, I decided yesterday afternoon to attend two important launches - the Bajaj Pulsar 135 LS which concluded today afternoon and the Honda 110cc motorcycles in Delhi which happens tomorrow (Thursday), and immediately backpacked and headed to the nearest airport in Chennai.

As I type this, the temperature here in Delhi is inching towards freeze zone, but the hot topics discussed during the launch of the new Pulsar this afternoon by Rajiv Bajaj and his team is keeping me warm.

I pitched questions regarding future of Bajaj that got Rajiv Bajaj talking. He did not shy away from questions and welcomed curiosity levels among journalists. I'll come to those details in a bit.

The Pulsar 135cc Pulsar LS (light sport) gives out 13.5hp that propels it to a top speed of 115kph. The bike is expected to return a fuel economy figure of 65kmpl in city conditions and is targeted at customers in the age group of 18 to 30 years. The new Pulsar has got nothing to do with the XCD Sprint concept shown at the Delhi Auto Expo last year, though it bears a striking resemblance. Priced at 51,000 rupees ex-showroom Delhi, the 135cc Pulsar LS holds the title of using the world's first 4-valve twin-spark petrol engine and the highest top speed and best acceleration in its segment.

Rajiv Bajaj said the Pulsar 220cc is the equivalent of the 7 Series, while the 135cc LS corresponds to the 3 Series in the BMW range. Hence a lower displacement motorcycle would not dilute the brand. He says the Pulsar brand would get diluted only if the bike doesn't look like one, ride like one or priced way too low. The appearance, performance and practicality of the new product is in the level of the existing Pulsars, he added.

XCD and Kristal get axed

Bajaj will axe the 135cc XCD motorcycle from its portfolio. The XCD will make way for the new Pulsar, which is for the performance oriented customer. The Discover 135 however will stay to play the role of a commuter offering.

Bajaj will also take down the Kristal scooter, which never saw expected volumes in India by the end of this fiscal. The scooter was being exported, but due to falling demand overseas, Bajaj sees no point in selling it anymore. Bajaj' primary focus is on motorcycles at present. They don't have any scooters on the drawing board so one can assume they won't be coming up with something in the next two years.

Rajiv Bajaj told me that his company is working on bigger Pulsars which will displace up to 400cc. The high powered bikes are expected to roll out by 2011. These performance bikes are also expected to come with multi-valve DTS-i engines.

Bajaj says its efforts are going into making the internal combustion engine the standard source of power. Bajaj has some R&D projects on hybrid or electric vehicles, but those are not on his agenda in the coming years.

The partnership with Motoczysz will see futuristic three wheelers in the coming months. Other than being a three wheeler, every other aspect of the vehicle will be different.

Boxer, Bajaj, KTM and RE brands

While the Boxer brand will be used on low-cost motorcycles meant for exports and Bajaj brand will take care of motorcycles in India, KTM will be Bajaj's full-fledged performance offering. RE (Rear Engined, a term used on Bajaj's 3-wheeled autorickshaw) will play the role of the company's commercial vehicle wing, which will soon swing into operation with more LCVs.

Not enough information? Check out our earlier posts below

- Bajaj says it will build cars other than ULC

- Our in-house review of the Bajaj Avenger