Bajaj CT100B is one of the most affordable motorcycles in the country.

Bajaj Auto was one of the first motorcycle manufacturers in India to update its entire line of motorcycles to meet the BSIV emission norms.

Bajaj retails the Bajaj CT100 in two variants, one with alloy wheels and the other with steel wheels (Bajaj CT100B). The latter even loses out on an alloy grabrail. Both the bikes however only get a kick starter. Other features include a long seat, large 10.5-litre fuel tank and a 3-inch wide rear tyre. The bike gains AHO.

The Bajaj CT100 is suspended over standard telescopic forks up front and a spring within a spring (SNS) twin shocks in the rear. Brakes include 110 mm drum at both ends while the bike tips the scales at 108 kg for the alloy wheels trim. The spoke wheels version is 1kg heavier. Colour options include Ebony Black with blue decals, Ebony Black with red decals and Flame Red. 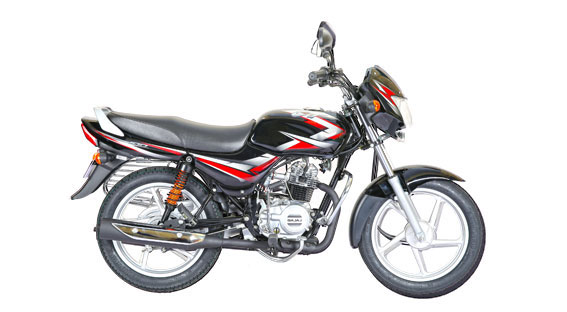