Further spyshots of the 2014 VW Polo facelift testing in India are now available. These give us a good idea on what to expect from the refreshed Polo when it launches in India in the middle of this year.

At the front, the refreshed Polo wears a new bumper which gets redesigned foglights, a chrome element connecting these foglights and horizontal structures for the airdam (the current Polo gets a honeycomb layout). The twin chrome grille is replaced, and the 2014 Polo gets only a single bar of chrome connecting the headlights.

The headlights on the international 2014 Polo feature new mirror housings and VW will even offer LED lights as an option. In the interest of cost, the Indian Polo will not receive these LED lights, instead, it will borrow its headlamps from the pre-facelifted European Polo. The headlights were always a distinguishing element between the Polo sold in India and abroad.

The profile of the refreshed Polo stays the same as the current model. Based on these spyshots, no changes are observed on the alloy wheels, or even the side indicators, which on the European Polo are integrated on the wing mirrors. 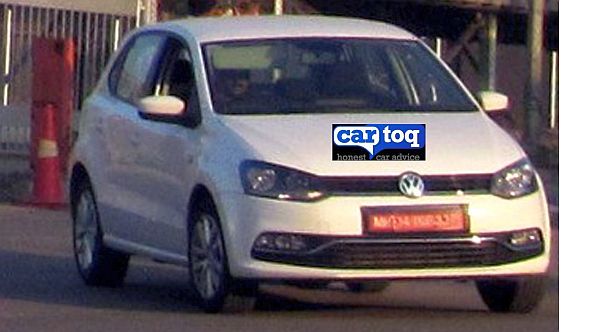 Upcoming cars that compete with the VW Polo facelift

[Click on the thumbnail to read more about the competitor]