The unreleased 2014 Ssangyong Actyon was caught testing in South Korea recently. The Actyon which was introduced in 2005 will get a comprehensive makeover and there is plenty of good news. 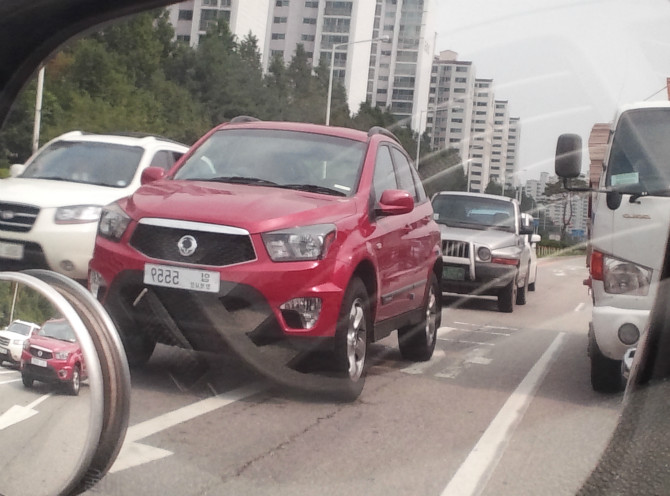 Firstly, the facelifted Actyon will shed its repulsive front fascia and that itself is a major talking point. As you can see in this image (and a previous spy image), the Actyon when viewed from the front looks almost Korando like which is high praise for the otherwise awkward looking car.

Earlier in May this year, Ssangyong updated the Korando Sports/Actyon Sports which is the pickup version of the SUV. It seems that the front fascia will be a carry over from the Actyon's pickup sibling.

At the rear, the taillights and bumper have been mildly altered to blend in with the rest of the car. Though the Actyon cannot be termed as a looker even in this facelifted version, it is certainly an improvement over its predecessor.

Underneath the hood, the Actyon facelift will see the inclusion of the 155bhp 2.0-liter diesel engine. The previous 2-liter 138bhp diesel is likely to be phased out. The Actyon also comes with a 3.2-liter petrol producing 150PS. While the petrol is available only with a 6-speed automatic gearbox (with a 4-speed AT available for some markets), the diesel will get a 6-speed manual additionally.

As of now, there are no plans to introduce the Actyon in the Indian market.