The new Indian Chief, a HD Road King rivaling cruiser, will be unveiled at the annual motorcycle rally conducted in Sturgis, USA. Here are few images of the India bound Indian. 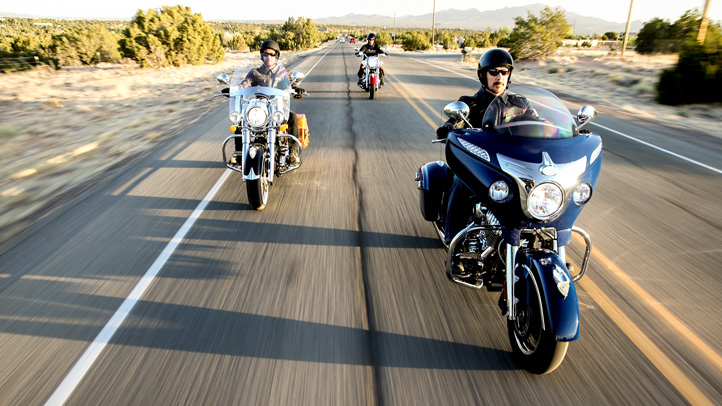 Auxiliary lamps on either side of the headlamp, a chrome finished engine, an illuminated Indian head (called the "war bonnet") on the front mudguard, tank mounted instrument dial along with a low and heavy stance characterizes the new Chief.

The Thunder Stoke 111 is a fuel injected 49 degree V-Twin liquid cooled petrol engine which generates 161 Nm of torque (Power output is not released yet). The engine is paired to a six speed transmission.

Head to next page to know about the variant lineup.

As the name implies, the Indian Chief Vintage tries to rewind the clock further. Called as the soft bagger, the Vintage features handcrafted leather saddle bags, quick release windshield, leather wrapped footrests and more chrome on the front mudguard. The rest of the styling is true to the Classic. The Chief Vintage is $2,000 (around 1.2 lakhs) more expensive than the Classic ($20,999 or around 12.78 lakh rupees).

The Chieftain is the flagship variant of the new Chief lineup. The motorcycle features a prominent fork mounted front fairing which incorporates LED turn indicators and a powered windshield. Designed for long distance touring, it sports an audio system with Bluetooth connectivity, tire pressure monitoring system and hard saddle cases which are removable. The Chieftain will be yours for $22,999 (around Rs. 13.99 lakhs).

Indian Motorcycle is gearing up to venture into many new markets and the official website says its coming soon to India! We can expect the Indian Chief to be launched here sometime next year. An entry during the 2014 Auto Expo can be a good option.

Head to the next page for a detailed image gallery.