IAB previously presented you the 2013 Range Rover, codenamed L405, through renderings published on the internet. Besides, several spyshots of the new Range Rover are doing the rounds on the web.

Now a Youtube user called fingerzdxb from Dubai, caught two 2013 Range Rovers testing under the hot sun. He also managed to shoot a video clip of them cruising on the bypass from Road Al Tayer Motors in Dubai Investment Park to the desert.

This particular Range Rover is special to India because it is the first model to be developed under the ownership of Tata Motors.

The new Rover is lighter thanks to the rivet-bonded aluminum chassis based on an altered version of the Jaguar XJ platform. The vehicle may shed up to 40% of the weight of the last-gen model. This leads to improved performance and frugality from the engine.

The design has taken some inspirations from the smaller Evoque. Notice those thin lines from the headlights flowing down till the tailgate. The L405 is also longer and has a lower roofline than the current vehicle. 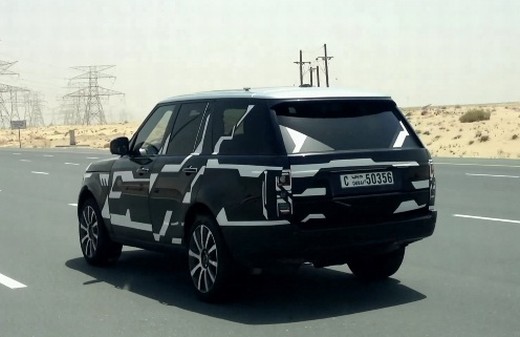 In the powerhouse section, we may get a supercharged 5.0-liter V8 and a normal V8. Diesel engines from current-gen will be used here as well (in V6 and V8 guises). Power output is expected to be between 260hp and 510hp. Power is transferred via an eight-speed transmission.

Stay tuned for IndianAutosBlog's coverage of the 2012 Paris Auto Show in September as the 2013 Land Rover Range Rover will break cover there.