2012 Honda CR-V gets spied inside out

Honda's next generation CR-V (Code - 2WS) has been spied partially uncovered in China. The exterior demeanor is similar to the concept Honda previewed through a photograph released last month.

The executives sanctioning this model for production aimed at introducing a sporty replacement to the big-winning crossover. With the Civic, the route taken was a slightly conservative/toned down one. But with the CR-V brave concept car trimmings have reached the production spec model. The extra large front grille caves into the headlamps while the stop lights are Volvo XC60-esque. The slabs on the radiator grille are thick and contoured, while the headlamps are pulled back into the front wings. The side profile is the same as revealed by an AutoBlog.com spy shot followed by an in-house SRK rendering.

There is a slight kink on the rear three quarters while the whole car looks more pointed unlike the currently serving model that is bulbous and rounded at many points. What we're still not able to identify is if the CR-V has metamorphosed into a 7 seater for the full family. Under the hood, the next gen CR-V will use a 2.4-liter four-pot petrol engine engine fitted with variable valve timing generating above 150bhp sending drive to either the front axle or all four wheels. Two years into its life, some markets could get a taste of an all-new diesel engine Honda's developing for some of its compact vehicles. The interior shots shows clear resemblance to the new Civic. The gear changer has been mounted on an extended dashboard, built using high quality materials, but unlike the Civic, parts adjacent to the driver has not been angled towards his sear in the view of improving ergonomics.

Honda has told IndianAutosBlog.com that neither the new CR-V nor the Civic will make it to the Auto Expo in Delhi next year. It is said that Honda will exhibit the production model in September, but not at the Frankfurt Motor Show. 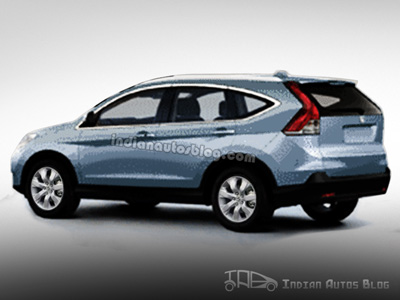