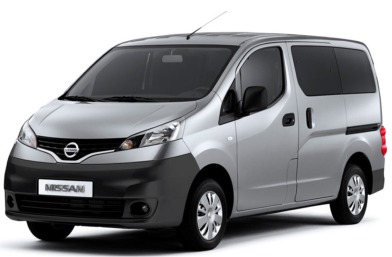 While returning from the supermarket after picking up groceries, I noticed a gray color van in traffic at the entrance leading to Mount Road here in Chennai. It wasn't camouflaged and nothing was unusual about it. I assumed it belonged to one of the consulates stationed here as they regularly use imported vans from their countries for commuting.

Until I check the number plate.

And the "On Test" sign stuck in the middle of the rear windshield.

I down-shifted, hit the gas and moved near the van. With less than 40 horsepower on tap, I tried extracting as much as I could from the car in an attempt to out run him.

On closer inspection I figured this was the Nissan NV200 that was spotted last year several times roaming on outskirts of Chennai. I quickly took out my camera but a Ford Fiesta swerved in front me, slowed down and stopped at the signal which hadn't yet turned orange.

Despite looking frantically for it after the signal turned green, I knew I was fighting a losing battle. So I head back home in dismay, it was a lost opportunity to bring a future car to the homepage of Indian Autos Blog.

Are there any secret joint ventures or partnerships between Nissan and Ford in India for "miscellaneous purposes" that you know of?

If you have spotted this vehicle and have pictures of it, why not get in touch with me at notjustshrawan (at) gmail.com