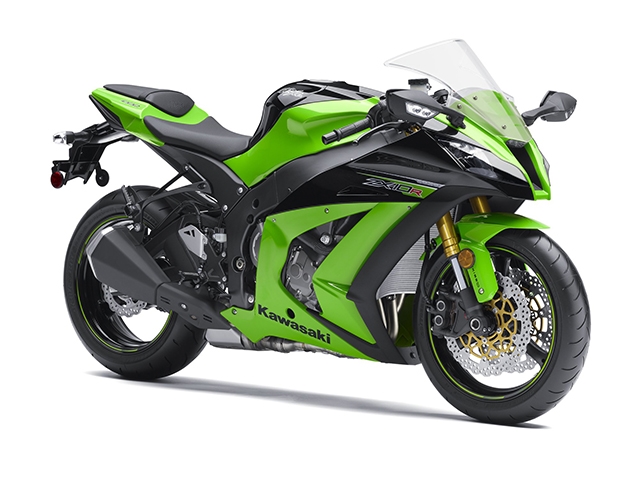 The Ninja 250, 300 and 650 are being brought into India as CKD units which are assembled by Bajaj. The sales and service is taken care by Bajaj's pro biking showrooms across India.

The big boys however will be CBU imports, so expect a steep price tag. Nevertheless, two new incoming super sportbikes are always good news for the biking enthusiasts.

The ZX-10R goes head on with the Yamaha YZF-R1. Being a track focused machine, the litre class Ninja is strictly for those who are in the upper echelons of biking.

A liquid cooled 998cc inline 4 cylinder 4-stroke engine breathes via 4 valves per cylinder to belt out an intimidating 197bhp. A 6-speed gearbox transmits that power.

The motorcycle comes packed with equipment like dual 310mm front discs up front, a 220mm single disc at the rear, ABS, Traction Control and other gadgets you would expect on a litre class superbike.

The ZX-14R is Kawasaki's answer to the Suzuki Hayabusa. Being one of the fastest production bikes that money can buy, the ZX-14R's design is in the same ball park as its rival from Suzuki. Perhaps something to do with the aerodynamics?

Power is courtesy of a liquid cooled 1,441cc inline 4 cylinder engine which is mated to a 6-speed gearbox. The superbike has in its store an insane power output of 210bhp! The ZX-14R features adjustable inverted telescopic forks up front and an adjustable Uni-Track gas charged shock absorber at the rear. Braking force comes from a pair of 310mm front discs and a 250mm rear disc.

Autocar India reports that the bikes would be launched in India later this month but would be available only in Pune initially. The estimated price tag for the Kawasaki ZX-10R stands in the vicinity of Rs. 16 lakhs. The ZX-14R will be priced even higher.